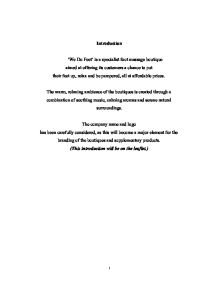 Research in to setting up a specialist foot massage boutique.

Introduction 'We Do Feet' is a specialist foot massage boutique aimed at offering its customers a chance to put their feet up, relax and be pampered, all at affordable prices. The warm, relaxing ambience of the boutiques is created through a combination of soothing music, calming aromas and serene natural surroundings. The company name and logo has been carefully considered, as this will become a major element for the branding of the boutiques and supplementary products. (This introduction will be on the leaflet.) Idea During the summer holidays I spent four weeks travelling Thailand with my family. There I noticed hundreds of foot reflexology shops full of European, American and Australian tourists. I had many foot massages myself when I was there and thoroughly enjoyed them. I thought to myself, what a great idea and opportunity it could be for me to open a chain of these in the UK, as I have never seen these before. But I knew I would have to act quickly to establish my business and brand first. Naturally the concept would have to be adapted to suit the UK lifestyle but the basic principle would be the same. Market research There are two main methods of market research: * Desk research/secondary research (uses data, or information, which already exists in printed form or computer files) * Primary research/field research (obtains original data or information, which did not exist before, from customers and other people) The primary data gained by field research is significant, because it is not available to any other businesses, unless they do their own research. Though, it is much more expensive than desk research and much more time consuming. When the information has been gathered, it has to be collated, and then analysed before any trends or information become evident. Secondary research is much easier and cheaper than primary research, because the data is already available and does not have to be gathered or analysed. ...read more.

92 % of the people I approached were interested in having a foot massage and 8% hated the idea of their feet being touched. Question 8 was also very important because I was going to find out if they would be willing to pay my price, 82% of the people said that they would pay the ten pounds. Question 9 would be crucial for the employment of staff. Everyone bar six people wanted a female masseuse and the other six ticked both because they did not mind. Question 10 was answered by everyone as a yes, because they thought it would be nice to have a hot drink whilst having their treatment. The results of Question 11 showed that very few people were interested in supplementary products, however with more information and good marketing stragergys I believe that these products would sell. Question 12 asked whether the interviewed people were resident in London. I found that this was the case for 60% of the people. This tells me that there are a fair amount of tourists and they would most likely enjoy the luxury. Question 13 was important for the promotion of the company because I need to know which magazines to advertise in if I decide to advertise my service above the line of promotion. The results showed that 32% were the fashion magazines like FHM and GQ. 55% were the celebrity gossip magazines like Hello, OK and Heat. Other magazines mentioned were specilised such as sport, home & garden and electronic magazines. Graphs To Show The Results In The Questionnaire Question 1: Gender Question 2: Age Because there were a wide variety of ages I can not plot them on the pie chart. Question 3: Occupation Question 4: Income per Annum Question 5: Reflexology (know what it is) Question 6: Ever experienced it? Question 7: Would they like it? Question 8: Price? ...read more.

92% of the people I asked liked the idea and 82% of people were willing to pay the �10.50 for a treatment. I have designed my marketing mix well to suit my business idea, my service is very professional and relaxed and that is what people want. I am promoting the idea using the cheapest methods available, and the just stop site is ideal because it is the busiest shop in England and on the busiest street in London. I think that my business will be successful because looking at the questionnaire people loved the idea. If I was to start this coursework again I would like more time because I would like to do more primary research, and question people throughout the year to see when business would be most busy. This is one thing I regret the most, I did not do as much research as I could have and this was very important to finding out what will bring success into the business. I went to Oxford Street on a Wednesday and a Saturday so that got a weekly variation and to no surprise it was busier on the weekend. I would have liked to do a seasonal variation because it would give a better idea of when business is best, without doing this I can assume that in the summer and for Christmas shopping it would be very busy. I think that the most important thing about success is the USP of the product and the low price of my product. I think that this business idea is going to be easier than others because if I was to open up a new supermarket, I would be immediately be pushed out by the bigger ones already in the market with all of the customers, like Marks and Spencer's and Tesco. If I could in the future I would like to open up a chain of these throughout London, Manchester, Bath and all of the other big cities. Naturally this will take years of hard work and effort. 1 ...read more.