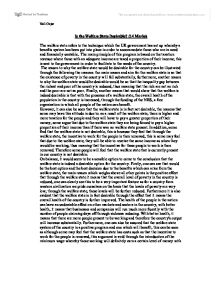 Should the welfare state be desirable?

Is the Welfare State Desirable? (14 Marks) The welfare state refers to the technique which the UK government has set up whereby a benefits system has been put into place in order to accommodate those who are in need and financially unstable.. The main principle of this program is based on the taxation revenue where those with an adequate income are taxed a proportion of their income; this is sent to the government in order to facilitate to the needs of the country. The reason to why the welfare state would be desirable for the country can be illustrated through the following the reasons: the main reason and aim for the welfare state is so that the existence of poverty in the country will fall substantially, furthermore, another reason to why the welfare state would be desirable would be so that the inequality gap between the richest and poor of the country is reduced, thus meaning that the rich are not as rich and the poor are not as poor. ...read more.

the overall level of poverty in the country is reduced, one can clearly see this to be a very important feature as for a country from western civilization we pride ourselves on the basis that the levels of poverty are very low; through the welfare state, these levels will be further reduced. Furthermore it is also evident that the welfare state is in fact desirable through the effect that it means the overall health of the country is further improved. The health of the people in the nation can have an undeniable effect on other markets and sectors in the country, with better health, it means that businesses and companies will run much more fluently with the number of people claiming days off through sickness reducing. With better health, it means that there are more people present to be working and therefore the country's output will increase substantially. Furthermore, one can also be assured that the welfare state system of the country is a positive program and one which will benefit, this can be seen as although some may feel that the welfare state has costs ...read more.

In addition, although have a welfare state is desirable, there may be some loop holes in the positive effects such as through the theory that the levels of poverty may be reduced, however the reason that many of the people are in poverty is due to any addictions or problems that they may with drugs and alcohol etc. Some may feel that the money that they will receive from the welfare state will not help their situation in terms of poverty, however it will actually simply fuel their addictions drugs or alcohol, thus meaning that they would remain in poverty. Although this loop hole may also be combated through the actual funding of the money to the people, whereby the government actually decide and control how they use the money so that it will actually benefit the person. Therefore, it can clearly be seen that the welfare state is definitely desirable for the country and through the multiple positive effects out weighing the negatives, is` evident that the welfare is actually desirable for the country. ?? ?? ?? ?? Neil Gujar ...read more.

It is good to read a committed piece like this and many of the arguments are valid. I think from the point of view of economic analysis, the writer should make it clearer what is opinion and what is fact. Also, there has not been enough development of the arguments against a welfare state