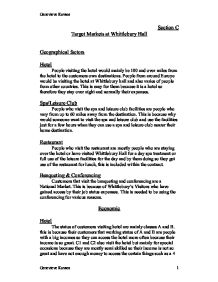 People visiting the hotel would mainly be 100 and over miles from the hotel to the customers own destinations. People from around Europe would be visiting the hotel at Whittlebury hall and also varies of people from other countries. This is easy for them because it is a hotel so therefore they stay over night and normally their expenses.

People who visit the restaurant are mostly people who are staying over the hotel or have visited Whittlebury Hall for a day spa treatment or full use of the leisure facilities for the day and by them doing so they get use of the restaurant for lunch, this is included within the contract.

Customers that visit the banqueting and conferencing are a National Market. This is because of Whittlebury’s Visitors who have gained access by their job status expenses. This is needed to be using the conferencing for various reasons.

There are not a great amount of people of the status of D and E because their income is not so great so they cannot afford to be visiting Whittlebury Hall.

The certain kinds of social economic groups would be A, B and C1 which stands for highly paid educated people, very well educated and well paid people. These kinds of customers with this status would be able to visit and use t6he spa and leisure facilities because they have the highest kind of income which means that they can access these facilities regularly. Other kinds of economic groups would be C2, but only occasionally and for special occasions of pamper days which are special deals which are easier to be afforded by semi-skilled workers. This is because they have not such a great income status. There are not many D and E because of their working income because Whittlebury Hall is too expensive.

Other kinds of age groups would be mainly couples with no children, middle aged guests with no children and old aged pensioners because they have the money and time to be using these facilities. Some young adults and couples with children because the couples with children can benefit from child baby sitting. The young adults would use the facilities occasionally because some have jobs and don’t have much of an outcome so have more spare money to spend on things like Spa and Leisure club within Whittlebury Hall.

The sorts of social economic groups within the restaurant are Highly paid and educated people, the other main variety of customers would be very well educated but not as greatly paid income as an A working class. This class A and B, these kinds of customers are the kinds of guests who Whittlebury Hall focuses on because they are more reliable to be regular customers. The class C1 and C2 are to be guests occasionally to Whittlebury halls restaurant because of special occasions such as birthdays, anniversaries and Valentines Day and occasions as such.  There are a few, if any guests of the economic groups D and E because Whittlebury Hall is too expensive for them to do because of their income.

The different kinds of life stages would mainly be used by couples with no children, couples with children, middle aged guests with no children and old aged pensioners. This is because they have the right and the correct amount of working income. Sometimes used by young adults and single teenagers because of special occasions such as prom, Valentines Day, weddings or just restaurants added within a package they have required.

The different kinds of guests to use Whittlebury hall’s banqueting would be mainly couples with children, couples with children, middle aged customers with no children and old aged pensioners they would use this facility because of different occasions and would be added within a package or working conferences. The other kinds of lifestyle guests that would use this facility would be occasionally single teenagers and young adults for special occasions such as weddings and proms.

The different social factors that would be using this facility would be both international and European visitors would have full use of the hotel. Because people with a greater income would visit and use the hotels. They would use it for various reasons such as if people internationally came to visit to see the surrounding or come for business would have need of access to the hotel because they have no-where else to stay unless they go back to their home place but that would harder because of their working stages. Some of these visitors will have disabilities.

The target markets are different because Drayton Manor Park focuses on the sort of customers that would be using facilities such as families and teenagers. Families would be much more interested in Drayton Manor because of Drayton Manor’s Thomas Land and Zoo. This is a good idea for Drayton Manor to offer because they are reaching out to other kinds of markets with a bit more income and more interest and may end out being regular customers because once their children have grown they can also use the ride facilities within the Theme Park. Teenager’s incomes are not so great but teenagers have more interest in Drayton Manors park facilities. Such as in Whittlebury halls guests if they wanted to go to theme parks would go to a much greater theme park such as Disney resorts because they are able to afford to visit.

Whittlebury Hall would be focusing on a different sort of guests because of their guests working income because others wouldn’t be able to afford certain facilities and functions example functioning rooms. Whittlebury hall guests visit as their own person because of business or various other reasons but on the other hand such as Drayton Manor come in groups because they offer more activity facilities.

The ages that Drayton manor target on would be more family and teenagers. Whittlebury Hall’s guests would be more singles, middle aged and above, this is because of the different sorts and kinds of facilities.

There are a much greater variety of nationalities within the Whittlebury Hall criteria’s because of their guests come from a much greater range but on the other hand within Drayton Manor there are more people of different languages visiting the theme park.

Marketing research techniques that Drayton Manor Park uses are internal surveys which the customer can do. These are called customer comment cards which are located at the food outlets. They also have customer comment cards and questionnaires at the entrance. By doing this Drayton Manor Park know what their customers want more of, what they dislike and other reasons, when this happens Drayton Manor can improve on the customer service which would give the customers less to complain about. This is a written kind of communication and is very helpful to The Park in getting feedback. Another kind of internal marketing research is that Drayton Manor produces it’s “Walking the Park”, this is when a certain member of staff or management goes around the Park asking customers about the service they have received and if there are any problems. This is a verbal way of communicating internally and provides useful information to the Park about what is going well or badly..

Drayton manor’s ways of using external surveys within the marketing research are that Drayton Manor pays an outside company to complete external market research every 2-3 years. They do this because by doing so they can find out what the customers want at Drayton Manor. Drayton Manor also has a mystery customer who visits and analyses the Park. The mystery customer normally reports this to the tourist board. They do this to make sure that the park is a safe enough environment for customers and that all the health and safety reasons. This is really useful to Drayton manor in a way because this can help Drayton Manor solve anything that is wrong and they can make it a great place to visit. External information being transferred through press or coach tour managers are good for Drayton Manor Park because by doing this it is putting in a good word for them. By doing this Drayton Manor receive more customers this way. Most customers receive this through coach tour managers because there is a big variety of customers visiting and using coach tour manager’s references.

Whittlebury Hall has a variety of communication within the business that gives them market research feedback. One of the things that Whittlebury offer their staff with is that they have comment cards which is where if a staff thinks that another staff has worked extra hard on something and deserves a good point towards them they write on a comment card and send it to the employees higher in the business which will address the staff with positive comment and take action on it. This comment card is also offered for Whittlebury Hall’s customers and this card would be found within the reception of the hotel and the rooms and spa. Another thing that Whittlebury Hall has internally is vouchers and service cards. This is lead from a comment card which is on of the actions that gets received to the staff. Another thing is that the customers can evaluate their customer service within Whittlebury Hall.