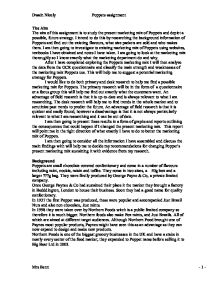 The aim of this assignment is to study the present marketing mix of Poppets and depict a possible, future strategy.

The Aim The aim of this assignment is to study the present marketing mix of Poppets and depict a possible, future strategy. I intend to do this by researching the background information of Poppets and find out the existing flavours, what size packets are sold and who makes them. I am then going to investigate to existing marketing mix of Poppets using websites, textbooks I have obtained and notes I have taken. I am going to look at the marketing mix thoroughly so I know exactly what the marketing department do and why. After I have completed exploring the Poppets marketing mix I will then analyze the data from the OCR questionnaire and classify the main strength and weaknesses of the marketing mix Poppets use. This will help me to suggest a potential marketing strategy for Poppets. I would like to do both primary and desk research to help me find a possible marketing mix for Poppets. The primary research will be in the form of a questionnaire or a focus group this will help me find out exactly what the customers want. An advantage of field research is that it is up-to-date and is always relevant to what I am researching. The desk research will help me to find trends in the whole market and to scrutinize past trends to predict the future. An advantage of field research is that it is quicker and easily found; however a disadvantage is that it is not always particularly relevant to what I am researching and it can be out of date. I am then going to present these results in a form of graphs and reports outlining the consequences that could happen if I changed the present marketing mix. This report will point me in the right direction of what exactly I have to do to better the marketing mix of Poppets. I am then going to consider all the information I have assembled and discuss the main findings with will help me to decide my recommendations for changing Poppet's present marketing mix sustaining it with evidence from my research. ...read more.

I expected the school to be last because only the school children could tick this option and a preponderance of them would buy their sweets from a corner shop before school as they tend to be cheaper. As I found the results of this graph interesting, I decided to investigate more into this question. To do this I made another graph to show how much of each age group buy from each outlet. Instead of using numbers I decided to find out the percentage of each age group because if I did use the numbers, age groups such as 13 - 16 would be extremely high as more people took that questionnaire than any other age group. This would distort the graph and not represent the data properly. As I expected the under twelve's and 13-16 year olds are the main purchasers from the corner shop this is because children and teenagers rarely visit the supermarket and tend not to buy their confectionary in bulk as supermarkets sell them but in ???. As you get to the 17-25 and 26-40 age groups less people buy from corner shops and the majority becomes the supermarket this is because adults tend to do weekly shopping and buy everything they need for the week in bulk. I think it is this sector of the market that buy Poppets in the larger plastic bag. The next question I decided to report on was question 6: "The price of a box of Poppets is approximately 31p. Do you think this is:" The graph did not produce the results I expected: I predicted a higher percentage of the south to think the value of Poppets is good than the midlands and north as the south of England is considered to be the richest part of UK. I was actually surprised to find that more of the North than anybody else thought that the value of Poppets was excellent/good since the North is deemed to be the poorest. ...read more.

They needn't change the style for the younger generation but perhaps for the over 40s they could present them as a luxury item, making them more rare and expensive and pack them in a larger box of assorted flavours. I have proven this in the primary data I gathered on page ___ in which I asked people of different age groups what packet they preferred their confectionary to come in. As expected a large number of over 40s preferred the large, luxury box, 22 out of 25 in fact! Also, 16, over half of the 30-40 year olds preferred them in a large luxury box compared to 1 of the under 12s and 4 of the 12-18s. To interest the new customers I suggest Poppets consider advertising of television as over 40% of every age group notices adverts on the television more than anywhere else. However this is very expensive and they should only do this if they are sure they can make their money back in the long run. As an alternative to television they could advertise in magazines and newspapers as over 16% in every age group notice these most. This is a considerable drop from television but it is much cheaper, you can advertise to specific areas of the country and still, millions of people of all age groups read newspapers and advertisements everyday. To generate new audiences and keep the customers still interested Poppets they could do 'buy one get of free' promotional deals as 44% nearly half of the peoples said that promotional deal makes them buy a product most. They could also use 'money off' deals as 26%, just over a quarter said this would make them buy a product. They should then advertise the fact that they are doing so on the packet to let the customers know. Dwain Nicely Poppets assignment Mrs Benn - 1 - ...read more.