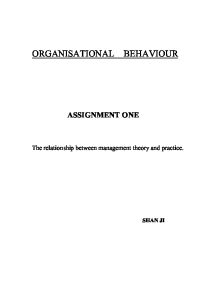 The relationship between management theory and practice.

ORGANISATIONAL BEHAVIOUR ASSIGNMENT ONE The relationship between management theory and practice. SHAN JI Page 1 Essentially, management is about organizing people and resources productively, to the mutual benefit both of the organization as a whole and of the individual employees. Management is a process, which enables organizations to set and achieve their objectives by planning, organizing and controlling their resources, including gaining the commitment of their employees (motivation). Planning is that deciding the objectives or goals of the organization and preparing how to meet them. Organizing is that determining activities and allocating responsibilities for the achievement of plans; coordinating activities and responsibilities into an appropriate structure. Motivating is that meeting the social and psychological needs of employees in the fulfillment of organizational goals. Controlling is that monitoring and evaluating activities, and providing corrective mechanisms. Organization theory is the body of thinking and writing which addresses itself to the problem of how to organize. Since the turn of the century writers on management and business have been propounding different theories about how to manage workers more efficiently and effectively. There are four main theories of management thought: the classical theories, human relations and social psychological schools, systems and contingency approaches, and modern approaches to management. Theorists of the classical school of management (the earliest of the schools) tried to form general principles of management, which could be applied to all businesses and situations. ...read more.

with its intrinsic challenge, interest and the individual responses generated by them. Herzberg's motivation-hygiene theory was generally well received by practicing managers and consultants for its relatively simple and vivid distinction between factors inducing positive satisfaction and those causing dissatisfaction. It led to considerable work on so-called 'job enrichment', i.e. the design of jobs so that they contain a greater number of motivators. The approach here is basically to counter the effects of years of Taylorism, in which work was broken down into its simplest components, and over which there was no responsibility for planning and control. Herzberg's ideas were less well received by fellow social scientists, mainly on grounds of doubt about their applicability to non-professional groups and his use of the concept of 'job satisfaction', which they argued is not the same thing as 'motivation'. By the late 1960's another group of theories began to challenge the dominance of human relations and psychology. These were theories that viewed organizations as complex systems of people, tasks and technology. The early work on this approach was conducted by British researches from the Tavistock Institute of human relations, who, despite their title, recognized that human or social factors alone were not the most important consideration in achieving organizational effectiveness. They recognized that organizations were part of a larger environment with which they interacted and in particular were affected by technical and economic factors just as much as social ones. ...read more.

But the employers don not listen to him. In the other company, the situation is same, the employers got ambitions, they work very hard, and then they think their new boss is too lazy. At the end, two managers swap back in a week. The reason of this is the style of these management is different, the two managers don not know anything about the other companies. They have not change the way to manage people in different environment. So that causes the failure of this changing of two managers. The other example: A video company which called videopoint, they think they are successful, but not enough. Why? Because the manager did not mention the psychology of the employers, he don not care about the mind of the employers, so that the workers are willing to work hard, they always complained about the manager. For instance, there were two workers present their ideas to manager, the workers is serious. When they finished, the manager is not satisfied, and he think the ideas are stupid, and he speak loud. The two workers felt disappointed and not willing to do this work. If the employers are not happy when they are working. So how can they work well? I think the manager should pay more attention on employer's felling, and encourage them not to always comment them. That will make the employers happy and work harder. The two examples above, both improve the importance of practice in organsations. ...read more.