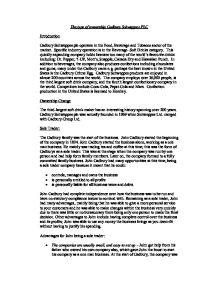 The type of ownership Cadbury Schweppes PLC Introduction Cadbury Schweppes plc operates in the Food, Beverage and Tobacco sector of the market. Specific industry operation is in the Beverage- Soft Drinks category. This quickly expanding company holds licenses too many of the world's favourite drinks including: Dr. Pepper, 7-UP, Mott's, Snapple, Canada Dry and Hawaiian Punch. In addition to beverages, the company also produces confections including chocolates and gums, many under the Cadbury name e.g. perhaps the best known in the United States is the Cadbury Cr�me Egg. Cadbury Schweppes products are enjoyed in almost 200 countries across the world. The company employs over 36,000 people, is the third largest soft drink company, and the fourth largest confectionary company in the world. Competitors include Coca-Cola, Pepsi-Cola and Mars. Confection production in the United States is licensed to Hershey. Ownership Change The third-largest soft drink maker has an interesting history spanning over 200 years. Cadbury Schweppes plc was actually founded in 1969 when Schweppes Ltd. merged with Cadbury Group Ltd. Sole Trader: The Cadbury family was the start of the business. John Cadbury started the beginning of the company in 1824. John Cadbury started the business alone, working as a one man business. He mainly was trading tea and coffee at this time; this was the form of Cadburys as a sole trader. ...read more.

* Cadburys depended and is determined by one person. If that one person looses interest or dies then the business will come to a close. Cadbury Limited: While the company wasn't making much growth, John Cadbury needed a more help. He received that help from changing Cadbury sole trader in to a limited company but he still didn't employ anyone. John was receiving the help that he needed form his family and the Quaker family. The Cadbury family and the Quaker family were both fully committed to the growth of the business. This type of ownership was working very well for Cadbury Limited because the company was expanding fast. The Cadbury family now could afford a rented factory to manufacture and a few shops to sell their products. However, at this point they still didn't employ because of the shortage of money but they were still working as a committed family business. Also to increase the businesses growth, John Cadbury had an advertisement: "John Cadbury is desirous of introducing to particular notice 'Cocoa Nibs,' prepared by himself, an article affording a most nutritious beverage for breakfast." This advertisement was placed in a plate glass window which attracted many people and increased his company's growth. Another reason that John Cadbury chosen to change his company into a limited company because it allows the Cadbury family to accept limited ...read more.