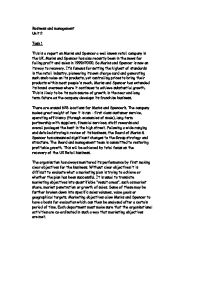 Business and management Unit 2 Task 1 This is a report on Marks and Spencer a well known retail company in the UK. Marks and Spencer has also recently been in the news for falling profit and sales in 1999/2000. So Marks and Spencer is now on its way to recovery. It's famous for setting the highest of standards in the retail industry, pioneering its own charge card and generating such snob value on its products, yet controlling prices to bring their products within most people's reach. Marks and Spencer has extended its brand overseas where it continues to achieve substantial growth. This is likely to be its main source of growth in the near and long term future as the company develops its franchise business. There are around 628 locations for Marks and Spencer's. The company makes great weight of how it is run - first class customer service, operating efficiency (through economies of scale), long-term partnership with suppliers, financial services, staff rewards and overall packages the best in the high street. Following a wide-ranging and detailed strategic review of its business, the Board of Marks & Spencer has announced significant changes to the Group strategy and structure. The Board and management team is committed to restoring profitable growth. This will be achieved by total focus on the recovery of the UK Retail business. The organisation has always monitored its performance by first making clear objectives for the business. Without clear objectives it is difficult to evaluate what a marketing plan is trying to achieve or whether the plan has been successful. It is usual to translate marketing objectives into quantifiable "result areas", such as market share, market penetration or growth of sales. Some of these may be further broken down into specific sales volumes, value goals or geographical targets. Marketing objectives allow Marks and Spencer to have a basis for evaluation which can then be analysed after a certain period of time. ...read more.

The knowledge and experience he acquired internationally enabled him to have an accurate perception of the opportunities, threats and risks M&S was facing. He had a clear idea on what the strengths and weaknesses M&S had so that he could make rational decisions and develop strategies to help the company rejuvenate the status they had lost. Among his decisions he identified priorities and focused on direction for the company. That is vital for a company like M&S, who had suffered unclear strategic decisions for many years. So far no big achievement has been seen but all the actions he took at M&S are similar to a surgery, in the sense that the patient (M&S) is not relived from pain but that's the start of his or her recovery. It will take time to see the good signs before the patient (M&S) gets better. Conclusions In the last few years, M&S has experienced the serious declination from a successful market leader to a company that's seen struggling. The flaws of its traditional 'formula for success' laid some potential problems for the company development yet it was some key strategic decisions that resulted in the failure. Decision making is a central part in management. Decision making process can be affected by both internal and external constraints such as inadequate or incorrect information about the problem, failure to identify the problem, resistance of employees to change, poor quality management, lack of resources both financial and physical, poor communication systems, lack of team work, the organizational; the time available to react, speed of competitor reaction, changes in consumer preferences, changes in technology, availability and cost of information. Strategic decisions, as long term decisions, require a highly detailed analysis because of their high cost, significance to for a company's long-term development as well as an absence of information and uncertainty. Decisions like market expansion and purchase of Littlewoods stores were strategic decisions. ...read more.

This may anger customers and this is bad PR. Hiring assistants may increase costs slightly but helpful assistants will improve customer relations and the customers won't have to look round the shop just to get some help. Assistants will also give a more friendly and helpful feel to the stores. Efficiency could improve if motivation amongst employees was better. Currently employees do not feel secure in their jobs, as there have been many job losses at M&S recently. Employees need to be told that their jobs are safe - a small pay rise could be given. Once Marks and Spencers starts implementing well researched recovery programmes the business will once again have its past success and profitability. This was all helped by Green Bury as he helped increase profits, cut cost as well as being the first company in the market they operate in to reaching 1billion as a profit margin. Greenbury inherited the management style of the previous chief executives, which is a 'top-down' management style. They paid great attention to details. They controlled almost every aspect of the business including the supplier control, merchandise and store layout. The centralized authority was highly emphasized. Greenbury was a person with overconfidence in himself and his decisions. He enforced an autocratic approach which enhanced the 'inward-looking' culture. He excluded his subordinates' opinions, which prevented him from getting informed of the real feedback of his decisions and changes in the operation and market. For instance, the customer satisfaction survey showing the declining satisfaction was kept away from him. 1998 was a turn for M&S as the decisions made by Greenbury were disastrous to the development of the company. The profitability dropped dramatically. The positive image faded away. However, before any focus shift takes place, it will be wise and valuable to conduct a customer survey to listen to what their customers' thinking. They had been incredible customers because to them M&S is more a lifestyle than a retailer. Due to the feeling, genuine and valuable opinions and advice can be guaranteed from the customer, which M&S should value. ...read more.