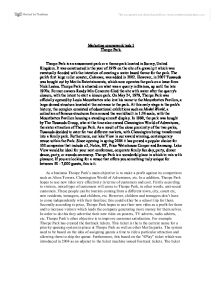 Marketing coursework task 1 Thorpe Park. Thorpe Park is an amusement park or a theme park located in Surrey, United Kingdom. It was constructed in the year of 1979 on the site of a gravel pit which was eventually flooded with the intention of creating a water based theme for the park. The park's first large roller coaster, Colossus, was added in 2002. However, in 2007 Tussauds was bought out by Merlin Entertainments, which now operates the park on a lease from Nick Leslau. Thorpe Park is situated on what was a quarry in Staines, up until the late 1970s. Former owners Ready Mix Concrete filled the site with water after the quarry's closure, with the intent to start a leisure park. On May 24, 1979, Thorpe Park was officially opened by Louis Mountbatten who lent his name to the Mountbatten Pavilion, a large domed structure located at the entrance to the park. At this early stage in the park's history, the complex consisted of educational exhibitions such as Model World, a collection of famous structures from around the world built in 1:36 scale, with the Mountbatten Pavilion housing a standing aircraft display. In 1998, the park was bought by The Tussauds Group, who at the time also owned Chessington World of Adventures, the sister attraction of Thorpe Park. As a result of the close proximity of the two parks, Tussauds decided to cater for two different markets, with Chessington being transformed into a family park. Furthermore, our lake View is our award winning, contemporary venue within the Park. Since opening in spring 2006 it has proved a popular choice for 100 companies that include o2, Nokia, BT, Price Waterhouse Cooper and Samsung. Lake View would be ideal for your next conference, corporate family fun day, party, dinner dance, party, or awards ceremony. Thorpe Park is a wonderful place in which to mix with pleasure. ...read more.

Peak and off peak pricing For school trips only Thorpe Park offer peak and off peak pricing. Peak is known as higher prices when the park is busy. Off peak is known as lower prices to encourage more visitors. Discounts Thorpe Park offers discounts on their normal prices e.g. large groups, students, OAP's schools. This makes Thorpe Park appeal to wider range of customers. Special offers Products are offered at special low prices, this encourages the sales of products. The actual selling price is the amount of money paid customers for their goods and services. Price is one of the most flexible parts of the marketing mix as it can easily be changed. Thorpe Park offers a range of seasonal discounts in order to attract new customers or visitors. Thorpe Park often using price discounts when promoting back. In regards of profitability prices allow Thorpe Park to make a profit. This means that Thorpe Park must charge a price that more than covers the costs of running the Park e.g. staff wages, maintenance, etc. Thorpe Park uses product to gain their marketing objective due to the sales of food, drink and new rides. According to this you would consider that their objecting is according on budget and price which leads to profit. However, Thorpe Park uses this money in order to make a new ride and they use by serving their product. Plus, they also gain money by selling their merchandise like cups, clothes, stationary, etc. Lastly their money is mostly generated from the selling of tickets. Furthermore, Thorpe Park uses its products and services in order to gain their objective. Products are tangible goods. This means they are things you can touch and see. Examples will be things like footballs or a program for an event. Services are more intangible goods. You can't actually see or touch them but they are still an important part of what is provided by the organization. ...read more.

Staines Station has regular trains going to and from it, and also a train direct to Staines from London waterloo, with a shuttle bus going straight to the park, from the station every 30 minutes. If all else fails, there is a coach from Victoria to Thorpe park, or just by entering your postcode on the website, they will find the nearest places to get a coach from. With the park being so near to London, and with so many ways of getting to the park, it makes it easier for people to come from further away, attracting a lot more customers. Travelling By Train Regular South West Trains run from Waterloo direct to Staines. The 950 shuttle link operates from Staines station to the Park running every half hour. Trains also run regularly from Reading and Guildford to Staines Station. An alternative route is available to Chertsey Station (2 trains an hour to Chertsey from Waterloo via Staines except on Sundays when there is one an hour) then catch either 451 bus from stop marked B on the Eastworth Road, or 446 at stop D 2 minutes away (out of the station forecourt turn left and across the traffic lights) journey time 5 minutes with 4 buses per hour on each route except on Sundays one every 2 hours. Travelling By Bus Staines Bus station is a 5 minute walk from the railway station. Buses for THORPE PARK depart from Stand 2, however, the 950 Thorpe Park Express departs directly from Staines Railway Station. Other services operate as follows. Travelling By Coach There is a coach service from London Victoria to Staines. Travelling By Car Thorpe Park is within easy reach of London. From the M25 take junctions 11 or 13* and follow signs via A320 to Thorpe Park. Car parking is free. The path taken to get products from organisations to customers is called a distribution channel. Thorpe Park delivers is product via tourist information centres, tour operators, over the internet from the Thorpe Park website and at the park itself. http://www.easyadverts.co.uk/thorpe-park-ticket-prices.htm ...read more.