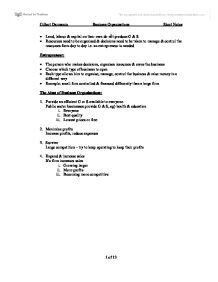 Multinationals can achieve great economies of scale Massive production lines producing millions of goods i.e. lower the average cost of producing each good below the average costs of companies making fewer goods 5. Multinationals have less chance of going bankrupt than smaller companies Produce a wide variety of goods; if demand for one product falls they have other products they can fall back on. Selling to a large number of countries reduces the risk of one country reducing its demand for the products of the company: risk-bearing economies of scale 6. Multinationals can carry out a lot of research & developments Spend large amounts of money on research & development to develop new products & be ahead of competing firms Disadvantages of being a multinational: 1. Multinationals move their factories to wherever it is profitable to produce Example: higher taxes on profit in Malta than in Korea i.e. close the Maltese factory & open in Korea i.e. workers - little control over their jobs. Govts want multinationals in their country when experiencing high unemployment - lower taxes on profits etc. - encourage multinationals to stay. Govts compete with each other - allows such companies to force competing countries to give them more favourable treatment 2. Multinationals may switch their profits between countries Transfer profits - countries with high taxes to those with low taxes Avoid paying any taxes to their host nation - happens in less developed countries - lack the ability to collect taxes - poor tax service & legal framework 3. They may force competing firms out of business Unemployment rises: size & wealth allow them to force smaller firms to go bankrupt & shut down 4. Some multinationals may exploit workers Locate in countries where labour is cheap - pay workers far less than a worker in a developed country i.e. wage costs low 5. Some multinationals may interfere in the government of the country Use subversive & illegal activities - influence the govt to promote & protect their own interests ?? ?? ?? ?? Gilbert Darmanin Business Organisations Short Notes 1 of 14 ...read more.