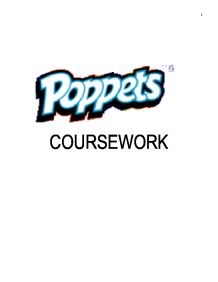 What recommendations could you give to Paynes to improve the marketing mix of Poppets?

COURSEWORK Table of Contents Aim: 3 Data Gathering 3 Background: 3 Promotion: 3 Price 3 Production 3 Place 3 Findings and Recommendations: 3 Appendix A 3 Appendix B 3 Aim: What recommendations could you give to Paynes to improve the marketing mix of Poppets? Secondary aims: Product: * Find out which flavours should be added/taken away from the current range. * Find how the packaging could be changed to make the product more appealing. Price: * Find out what customers think of the current price. * Which gender thinks that Poppets are over-priced, as compared to the other? Place: * Find out the most popular point of sale for products such as Poppets * Find out where most 15-18 year olds buy their chocolate products. Promotion: * Find out which types of promotion are effective. * Make specific suggestions and give examples of how promotion should be developed. * Concentrate on the 15-18 age group, and which advertising works best to encourage them to buy the product. How aim will be achieved: Desk and field research will be carried out, to ensure that enough data is available - and that it is of a high variety. This will mean getting a relatively large sample to be surveyed, and collecting a lot of secondary data. A small focus group will be used to gather data about the product and its packaging, as well as the web-site. Data Gathering The most important research obtained was the primary data gathered through field research. This was the data from the questionnaire. All students of Business Studies in Year 10 had to survey at least 10 people with an identical questionnaire (set by the board). All of the results were then entered into a database, giving everybody a very large sample (665 completed questionnaires). This database could then be interrogated to show trends throughout the results. Another source of primary data was obtained by interrogating a focus group into their views on many aspects of Poppets marketing. ...read more.

More detail about when adverts should be screened is given above. We can see that there is only a difference of 3% between the number of males who have tried Poppets and the number of females. This is a negligible difference - and we cannot conclude that females are the target audience of the advertising. However - to make sure this is the case, we can see how many females/males have heard of Poppets, proportionally. Here, the gap is twice as wide. But, surprisingly, more MALES have heard of Poppets than females. The gap is 6%, so we cannot be sure that if our sample was much larger that the gap would be as large. With both results - the difference is not enough to conclude for definite that more females across the UK have tried Poppets, and that more males have heard of them. So why is there practically no difference. The product itself does not seem to be biased in any way to a particular gender. Most people like to consume a good-tasting chocolate product. Also, all the adverts have both males and females in them (usually fighting with each other). The web site did not fair as well as the product and the packaging for the focus group. The focus group agreed that the site was designed well - but it "tried too hard to be cool and hip". This was mainly in reference to the text on the web site. However, the graphics (mainly the characters) were also said to be to retro and "babyish". Price Since the product is going to be sold to consumers, it is important to find out what they think of the price. If most people think it is too expensive, sale are not going to be high, especially if competitor's prices are lower. A price should be chosen which brings more income than expenses and is attractive. ...read more.