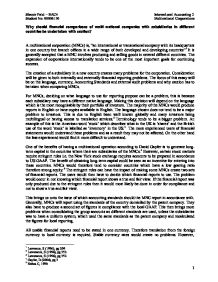 Why should financial comparisons of multi-national companies with subsidiaries in different countries be undertaken with caution?

Why should financial comparisons of multi-national companies with subsidiaries in different countries be undertaken with caution? A multinational corporation (MNCs) is, "an international or transnational company with its headquarters in one country but branch offices in a wide range of both developed and developing countries"1 It is generally accepted that a MNC involves producing and selling goods in several different countries. The expansion of corporations internationally tends to be one of the most important goals for continuing success. The creation of a subsidiary in a new country creates many problems for the corporation. Consideration will be given to both internally and externally financial reporting problems. The focus of this essay will be on the language, currency, Accounting Standards and external audit problems and why caution has to be taken when comparing MNCs. For MNCs, deciding on what language to use for reporting purpose can be a problem, this is because each subsidiary may have a different native language. Making this decision will depend on the language which is the most recognisable by their portfolio of investors. The majority of the MNCs would produce reports in English or have copies available in English. The language chosen does not tend to be a major problem to investors. This is due to English been well known globally and many investors being multilingual or having access to translation services.2 Terminology tends to be a bigger problem. ...read more.

Therefore translation from the foreign currency to local currency is required. Stable currency rates would create no problems. However, "exchange rates are seldom stable"6 and as a result it would increase the number of translation rates creating more foreign exchange gains and losses. There are three main exchange rate methods, historical, current and average. The historical exchange rate method would 'shield' whereas the current exchange rate method would 'cause' translation gains and losses.7 Therefore as different MNCs would use a different method, their financial statements would be incomparable, as they would not have been compared on the same basis. The MNCs would need to decide which currency to report in. This would depend on the location of major investors, areas of business activities, international recognition of currency and the country of domicile both legal and actual.8 Within the last five years or so many questions has been raised regarding auditing. The postulation that the high level of potential income that the auditors may receive from a client would influence the result of the audit, raises the question, how credible are the financial reports?9 The main challenges facing a user of financial reports are the credibility of the figures. The auditing profession has the problem of users not knowing whether the reports comply with the accounting standards. ...read more.

Unfortunately the problems of comparability are unlikely to go away, especially when the US offers the option of IAS or US GAAP, although international harmonisation processes may reduce them. In conclusion when comparing financial statements of MNCs that have subsidiaries it is worth being cautious. There are many areas that can be misleading when making this comparison. The terminology used in financial reports varies from country to country and as a result inaccurate comparison may be made. The accounting standards that need to be complied with by the MNC will vary depending on its domicile and if they are listed on any stock exchanges. As they may have to produce more than one financial report but complying with different standards it is likely that they only comply with the standard rather than try and provide a true and fair view. The translation exchange methods used to consolidate the reports will impact through gains or losses. As different MNCs would use different method of translation it would not allow a fair comparison. It is not possible to know whether the audit has been done accurately and correctly. The credibility of the audit report is still very much open to discussion. The Big Five are not answerable to anyone and they do have a tendency to sign off the audit report when accounting error exists with the financial report. Financial comparison between cross-border and within-border will blur with continuing globalisation and improvements in international accounting. ...read more.