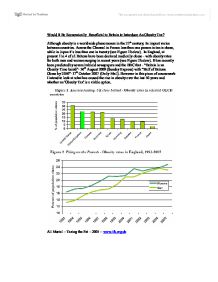 Would It Be Economically Beneficial to Britain to Introduce An Obesity Tax?

Would It Be Economically Beneficial to Britain to Introduce An Obesity Tax? Although obesity is a worldwide phenomenon in the 21st century, its impact varies between countries. Across the Channel in France less than one person in ten is obese, while in Japan it's less than one in twenty (see Figure 1 below). In England, at present 1 in 4 of all Britons have been declared medically obese - with obesity rates for both men and women surging in recent years (see Figure 2 below). It has recently been predicted by several tabloid newspapers and the BBC that - "Britain is an Obesity Time b**b"- 30th August 2009 (Sunday Express) with "Half of Britons Obese by 2050"-17th October 2007 (Daily Mail). However in this piece of coursework I intend to look at what has caused the rise in obesity over the last 50 years and whether an 'Obesity Tax' is a viable option. Ali Muriel - Taxing the Fat - 2005 - www.ifs.org.uk The Cause So why are the obesity rates in the UK rising at such an alarming rate? Many factors have been blamed such as the press, fast food outlets, TV's and a lack of exercise. However the implication seems to be that either people are getting hungrier (eating more) ...read more.

suggests that it is in fact the changes in the technology of food production. Up until the 1980's a large percentage of food was home cooked. However with the invention of the microwave and the introduction of new preservatives food is preserved and ready to cook immediately. This eliminates the time cost as most food is now pre-washed and vacuum packed; this advance is down to the division of labour making goods cheaper. This revolution in food preparation means that we can consume both greater quantities and a greater variety of food than ever before. This, coupled with the changes in the technology of work and computer-based jobs, has caused the rise in obesity. What can be done? Obesity has costs for the whole society. On an individual basis there is a cost to health in terms of increased risk of diabetes, stroke etc. For the wider society within England, the cost to the NHS of treating obesity-related health conditions is estimated to be rising as high as �6.3 billion by 2015 (http://www.healthcarerepublic.com/news/934442/Cost-obesity-NHS-England-rise-62-billion/). The government have tried public information campaigns and educating the public on how to lower the risk of obesity, however none of these have halted the increase and therefore I believe an 'Obesity Tax' should be introduced. ...read more.

Conclusion As can be seen on the table to the right the cost of obesity is rising and it needs to be subdued before the costs spiral out of control and it has an irreversible effect on the country. I have outlined above four options: 1) Taxing fat foods 2) Indirect taxation 3) Direct taxation 4) Tax reduction for company's or employees I believe that the best option would be the use of direct taxes coupled with the use of Tax reduction for companies or employees. The taxing of fat foods wouldn't work as people would still buy the food and therefore prices would need to rise to an extremely high price before people stopped buying them. However the use of tax reduction targets directly the employed and at the same time encourages the companies to think about their staff. If this measure proved successful the use of tax reduction on companies who use less saturated fats in their food could be introduced as this borrows some of the ideas from indirect taxation. The use of direct taxation would target the problem of obesity at the source (people who buy the fatty foods) and therefore would be a successful long term option to lower obesity and make it less financially viable for people to buy the food. At least until the companies themselves decrease the amount of fat in their products. ...read more.

This is an excellent piece of economic analysis. Although I fundamentally disagree with the practicality of the suggested solution I admire the arguments and analysis very much. It is systematically argued