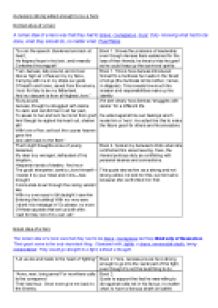 Aeneas as a hero - comparing the Roman and Greek ideals.

﻿Aeneas is strong willed enough to be a hero Roman idea of a hero A roman idea of a hero was that they had to brave, courageous, loyal. Duty- knowing what had to be done, what they should do, no matter what. Pius/Pietas. ?So ran the speech. Burdened and sick at heart, He feigned hope in his look, and inwardly Contained his anguish? Book 1. Shows the problems of leadership: even though Aeneas feels saddened for the loss of their friends, he tries to hide his grief so he could keep up the survivors? spirits. "I am Aeneas, duty-bound, and known Above high air of heaven by my fame, Carrying with me in my ships our gods Of hearth and home, saved from the enemy. ...read more.

the course heaven gave him And went back to the fleet.? We see clearly how Aeneas ?struggles with desire? for a different life. He acted against his own feelings which made him a ?hero?. He acted like this to make the future good for others and his ancestors. ?Each night thoughts come of young Ascanius, My dear boy wronged, defrauded of his kingdom, Hesperian lands of destiny. And now The gods' interpreter, sent by Jove himself? I swear it by your head and mine?has brought Commands down through the racing winds! I say With my own eyes in full daylight I saw him Entering the building! With my very ears I drank his message in! ...read more.

Obsessed with; battle, a brave, memorable death, being remembered. They would go straight to a fight, without a thought. ?Let us die and haste to the heart of fighting? Book 2. Here, Aeneas proves he is strong enough to go into the worst part of the fight, even though it?s not the best thing to do. ?Arms, men, bring arms! For now there calls to the conquered Their last hour. Once more give me back to the Greeks; Let me seek the fighting again and stir it anew; Never this day shall all of us die unavenged!? Book 2. Quote to support the fact he was willing to die against odds not in his favour, no matter what, to have a famous death (in battle) Showing he has the will to do this. ...read more.