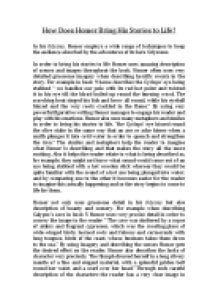 How Does Homer Bring His Stories to Life in &quot;The Odyssey&quot;?

﻿How Does Homer Bring His Stories to Life? In his Odyssey, Homer employs a wide range of techniques to keep the audience absorbed by the adventures of its hero Odysseus. In order to bring his stories to life Homer uses amazing description of scenes and images throughout the book. Homer often uses very detailed gruesome imagery when describing horrific events in the story. For example in book 9 home describes the Cyclops' eye being stabbed ? we handles our pole with its red hot point and twisted it in his eye till the blood boiled up round the burning wood. The scorching heat singed his lids and brow all round, while his eyeball blazed and the very roots crackled in the flame.? By using very powerful figurative writing Homer manages to engage his reader and play with his emotions. ...read more.

familiar with the sound of a hot axe being plunged into water, and by comparing one to the other it becomes easier for the reader to imagine this actually happening and so the story begins to come to life for them. Homer not only uses gruesome detail in his Odyssey but also description of beauty and scenery. For example when describing Calypso?s cave in book 5 Homer uses very precise detail in order to convey the image to the reader ? The cave was sheltered by a copse of alders and fragrant cypresses, which was the roosting-place of wide-winged birds, horned owls and falcons and cormorants with long tongues, birds of the coast, whose business takes them down to the sea.? By using imagery and describing the senses Homer gets the desired effect on the reader. ...read more.

The use of epithets throughout the stories helps the reader understand the most important characteristics of the characters at the point of time. For example when Odysseus decides not to jump off the ship and kill himself, when he finds out that they nearly reached Ithaca and then got swept away miles back, but instead decides to stay and endure he is called ?ever enduring Odysseus?. This helps the reader to understand the feelings and aspects of Odysseus better as he the reader is only told that he is enduring through the epithet. Throughout his stories Homer plays with the readers emotions making them anxious, happy and empathetic for the characters. Homer does this by varying his tone, imagery and pacing of the story. For example, when describing the sights of Scylla and Charybdis in book 12 ...read more.