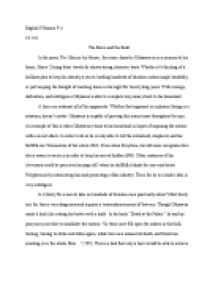 Odysseuss attributes are the perfect recipe for any epic hero.

﻿English 9 Honors P.4 1/11/11 The Brave and the Bold In the poem The Odyssey by Homer, the main character Odysseus is on a journey to his home, Ithaca. During these travels he shows strong character traits. Whether it?s thinking of a brilliant plan to keep his identity a secret, battling hundreds of drunken suitors single handedly, or just keeping the thought of reaching home in his sight for twenty long years. With courage, dedication, and intelligence Odysseus is able to complete his journey back to his homeland. A hero can outsmart all of his opponents. Whether that opponent is a physical being or a situation, doesn?t matter. ...read more.

Other instances of his cleverness could be perceived on page 665 when he skillfully blinds the one-eyed beast Polyphemus by intoxicating him and presenting a false identity. There for he is a leader who is very intelligent. Is it likely for a man to take on hundreds of drunken men practically alone? Most likely not, for this is very dangerous and requires a tremendous amount of bravery. Though Odysseus made it look like cutting hot butter with a knife. In the book ?Death at the Palace? he and his puny army are able to annihilate the suitors, ?So these now fell upon the suitors in that hall, turning, turning to strike and strike again, while torn men moaned at death, and blood ran smoking over the whole floor?? (705). ...read more.

With perseverance Odysseus is rescued and moves on with his travels. Once again on page 658 he shows his strong desire to get home when he and his men arrive at the island of the Lotus Eaters. Lotus Eaters are plants that make one lose memories and hopes of arriving home, but Odysseus quickly recognizes this and seizes the moment. In the end his dedication helps him reach his only destination in sight. So as you can see Odysseus can be viewed as a heroic man with many shining character traits. Whether it?s being wise like an owl, courageous as a lion, or even being as determined as a bratty child. Odysseus?s attributes are the perfect recipe for any epic hero. ...read more.