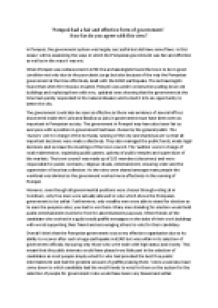 &quot;'Pompeii had a fair and effective form of government' Discuss&quot;

Transfer-Encoding: chunked ﻿?Pompeii had a fair and effective form of government.? How far do you agree with this view? In Pompeii, the government system was largely successful but did have some flaws. In this essay I will be examining the ways in which the Pompeian government was fair and effective as well as in the ways it was not. When Pompeii was rediscovered in 1748 the archaeologists found the town to be in good condition not only due to the pyroclastic surge but also because of the way the Pompeian government at the time effectively dealt with the 62AD earthquake. The archaeologists found that when Mt Vesuvius erupted, Pompeii was under construction pulling down old buildings and replacing them with new, updated ones showing ...read more.

The ?duovirs? were in charge of the everyday running of the city and shared power so that all important decisions were made collectively. They also managed the public funds, made legal decisions and oversaw the meetings of the town council. The ?aediles? were in charge of road maintenance, organising public games, upkeep of public temples and supervision of the markets. The town council was made up of 100 members (decurions) and were responsible for public contracts, religious rituals, entertainment, ensuring order and the supervision of local tax collection. As the roles were shared amongst many people the workload was divided so the government worked more effectively in the running of Pompeii. ...read more.

Overall I think that the Pompeian government was a very effective organisation due to its ability to recover after such a huge earthquake in 62AD but was unfair in its selection of government officials, favouring only those who were male with high status and money. This meant that the public interests would have played very little part in the selection of candidates as most people simply voted for who had provided the best free public entertainment and had the greatest amount of graffiti praising them. Votes would also have come down to which candidate had the most friends to vote for them so the system for the selection of people for government roles would have been very biased and unfair. ...read more.