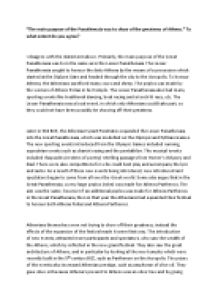 The main purpose of the Panathenaia was to show of the greatness of Athens. To what extent do you agree?

retelling passages from Homer?s Odyssey and Iliad. There were also competitions for who could best play and accompany the lyre and aulos. As a result of these new events being introduced, new introduced and spectators began to come from all over the Greek world. Some also argue that in the Great Panathenaia, a very large peplos (robe) was made foe Athena Parthenos. The aim was the same, however if an additional peplos was made for Athena Parthenos in the Great Panathenaia, then in that year the Athenians had expanded their festival to honour both Athena Polias and Athena Parthenos. Athenians themselves were not trying to show off their greatness, instead the effects of the expansion of the festival made it seem that way. ...read more.

However, as a result, it showed their wealth in oil, so that60 amphorae of oil could be given to a winner of chariot racing and one amphora contained 40L of oil. The amphorae of oil also contained paintings of the sporting events on one side and a picture of Athena Polias on the other side. This indirectly showed of the skills of Athens in arts, painting and pottery. The prizes of the musical events involved olive crowns in gold and shoed Athens? wealth. The fact they also gave prizes to the second place winners also showed their wealth. Taken together, the expanded games and expensive prizes given to both first and second place contestants served to showed the greatness of Athens, and increase its prestige. However, welcome to the Athenians, the primarily purpose to honour the city?s goddess was served. ...read more.