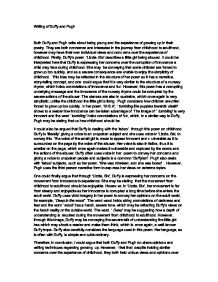 Writing of Duffy and Pugh

Writing of Duffy and Pugh Both Duffy and Pugh write about being young and the experience of growing up in their poetry. They are both concerned and interested in the journey from childhood to adulthood, however may have their own individual views and concerns over the experience of childhood. Firstly, Duffy's poem, 'Lizzie, Six' describes a little girl being abused. It could be interpreted here that Duffy is expressing her concerns over the corruption of innocence a child may face during childhood. She may be conveying that some children are forced to grow up too quickly, and as a severe consequence are unable to enjoy the simplicity of childhood. This idea may be reflected in the structure of her poem as it has a narrative, story-telling concept, and one could argue that it is very similar to the structure of a nursery rhyme, which holds connotations of innocence and fun. ...read more.

It could also be argued that Duffy is dealing with the 'taboo' through this poem on childhood. Duffy is 'literally' giving a voice to an unspoken subject and she uses voice in 'Lizzie, Six; to convey this. The voice of the small girl is made to appear innocent and vulnerable as it is surrounded on the page by the voice of the abuser. Her voice is also in italics, thus it is smaller on the page, which once again makes it vulnerable and captured by the words and the actions of the abuser. Duffy often uses voice in her poem to convey her concerns and giving a voice to unspoken people and subjects is a common 'Duffyism'. ...read more.

The word, 'Deep' may be suggesting how a depth of understanding is required during the movement from childhood to adulthood. However, through this image, Duffy may be conveying the severe talk of understanding the little girl has which may shock a reader and make them think, which is once again, a well-known Duffy trope. Duffy also carefully considers the language used in this poem. Her language, as is often with Duffy, is simple and quite ordinary. Therefore, in conclusion, i could argue that both Duffy and Pugh do share opinions and writing techniques regarding growing up. However, I feel that, despite holding similar concerns over the experience of childhood, they both held unique views and opinions over the subject, perhaps as childhood was such a unique experience to them and is to everybody. ...read more.