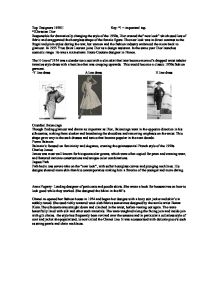 Top Designers 1950!! Key: *! = important/ top. *!Christian Dior Responsible for dramatically changing the style of the 1950s, Dior created the" new look" which used lots of fabric and exaggerated the hourglass shape of the female figure. The new look was in direct contrast to the frugal and plain styles during the war, but women and the fashion industry embraced the move back to glamour. In 1955 Yves Saint Laurent joins Dior as a design assistant. In the same year Dior launches cosmetic range. He was a mainstream Haute Couture designer in France. The H-line of 1954 was a slender tunic suit with a slim skirt that later became more of a dropped waist tubular twenties style dress with a hemline that was creeping upwards. This would become a classic 1950s fashion garment. -Y line dress A line dress H line dress Crist�bal Balenciaga Though finding glamour and drama as important as Dior, Balenciaga went in the opposite direction in his silhouettes, making them sleeker and broadening the shoulders and removing emphasis on the waist. This shape gave way to the sack dresses and tunics that became popular in the next decade. Pierre Balmain Balmain's focused on femininity and elegance, creating the quintessential French style of the 1950s. ...read more.

3. Leather jackets became a favourite of the "cool crowd" after seeing Elvis sport one on television. 4. The strapless dress with the fullest skirts attainable became a favourite for evening wear. Most materials were for export only in the 50's due to lack of money post war time. 1951 was the release of materials and patterns classed as luxury items as they were in colours, styles and fabrics mostly never seen before. (The Festival Of Britain Exhibition of 1951 held at the South Bank on the River Thames in London produced over 6000 products many of them clothing, accessories and dress fabrics.) The government took away access to materials from the british public to rebuild the economy and quietly traded abroad. Marks and Spencer's takes off Classed as best ready to wear chain, and affordable, Marks and Spencer's quadrupled profits in the 50's. The Quality became so high they had to limit production as everyone wanted the affordable stylish Paris inspired 1950s glamour. Late fifties launch (M&S) In the late fifties a popular style was the knitted sweater dress, with crew, shirt tab front or cowl necks and made from Orlon or Lambswool. As there was no central heating at this point of time, knitted dress's were worn in winter, and most women wore their girdles and long line bra's underneath to cover the thigh's. Petticoats and Paper Nylon. ...read more.

By 1958 the style really began to catch on. Quant modified this in the sixties to her taste. Alternative slim silhouette Made from hard wearing materials such as wool and suit materials, the slim line silhouette opposed the full skirts. The new synthetic materials were ideal. often had a large white organdie collar and cuffs with a bias bound edge that could be detached and washed, then sewn back into position. Such cuffs were called French cuffs. Coat by Jacques Fath Another influential fashion silhouette of the period was that of the late 1940's swing coat by Jacques Fath, which was a great shape to cover up full skirts and an ideal silhouette for the post war high pregnancy rate. This style was also often made as a loose full tent line duster coat, but often without the double breasted feature and buttons shown here. Stockings Seamless stocking were introduced 1952 The Second World War left women craving for glamour, style and swathes of fabric where scraps of material had once existed. Dior's full skirted and waisted designs fulfilled all the early dreams of the feminine woman in the early 50's. As a new, more liberated society evolved, women moved toward freer more relaxed clothes and began the move away from the dress rules and associated formality of decades. Classic designs of the 1950's A line H line Y line Pencil Skirt Chemise Circle Skirt Flared Skirt Pannier Skirt ...read more.