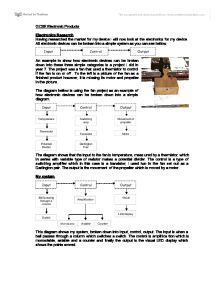 My system This diagram shows my system, broken down into input, control, output. The input is when a ball passes through a column which switches a switch. The control is amplification which is monostable, astable and a counter and finally the output is the visual LED display which shows the points scored. GCSE Electronic Products Situation I become bored on rainy days and want a game that without any skill I can play. I saw a game in Argos called 'Mini Skeeball Game', the only problem was that adding up the points manually became boring quickly and lowered the fun part of the game. If the game counted the points automatically the game would entertain me for longer and be easier to play for younger children who struggle to count. ...read more.

How it works To explain how the game works I will use this drawing I created to the right. The ball is dropped by the player. It then falls onto the black dots (the nails) which has a random effect of the journey it travels down to the 'columns'. Therefore when it reaches the bottom it could end up passing through any column. Each column is worth different amounts of points, if the ball passes through the column worth 5 points then the number 5 is shown on a LED display. This can then be repeated by the player and if they get a 3 this time it will be added onto the 5 from the last round therefore the LED display will show the number 8. The game can be played like this until the LED display reaches its maximum amount (99). ...read more.