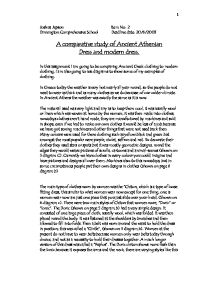 A comparative study of Ancient Athenian Dress and modern dress.

Joshua Jepson Item No. 2 Dinnington Comprehensive School Deadline date: 20/6/2003 A comparative study of Ancient Athenian Dress and modern dress. In this assignment I am going to be comparing Ancient Greek clothing to modern clothing, I am also going to use diagrams to show some of my examples of clothing. In Greece today the weather is very hot nearly all year round, so the people do not need to wear as thick and as many clothes as we do because of our colder climate. In Ancient Athens the weather was exactly the same as it is now. The material used was very light and airy as to keep them cool, it was usually wool or linen which was woven at home by the women, it was then made into clothes, nowadays clothes aren't hand made, they are manufactured by machines and sold in shops, even if we had to make our own clothes it would be less of a job because we have got sewing machines and other things that were not used back then. Many colours were used for there clothing such as yellow black and green but amongst the most popular were purple, violet, saffron and red. ...read more.

The only thing it is like is shorts and t-shirt because all they are really is a chiton cut in half at the waist. Men now were trousers more often than not with a jumper, but of course they didn't have these because their climate was much hotter than it is in our northern country. Men also used the himation, mostly when they were outside or on long journeys. For men nowadays this is a bit like a scarf, but too keep them warm they usually wear a fleece or thicker jumper. This garment was fastened at the shoulder, with a broach or pin. On special occasions a long robe was worn and the right shoulder was often left bare. Men wear suits on special occasions now, but then if they wore suits they would get too hot. Young children rarely wore clothes because they grew out of them very fast. As girls began to get older they started to wear a simple sort f "smock", which was above their knees. When boys grew old enough to go to school they began to wear garments similar to the mans chiton. In the modern day children wear clothes from the day they are born, just a simple one-piece suit. ...read more.

your neck, it covers it with white-lead This is only part of the poem but it tells the embarrassing truth about what would happen if you went out with too much make-up on back then in Ancient Greece. Currently clothes are all different shapes and we use wardrobes so when they have been ironed they don't get creased, but then, most Greek clothes were rectangular so they could fit into chests. There wasn't much too choose from in the underwear department then because women wore a strip of cloth as a bra and that was it, there weren't any boxer-shorts or knickers. A boy's chest might contain pairs of sandals, boots and a pair of slippers for clod mornings. He'd also have a few hats, a belt and a short cloak if he rode a horse. If a boy was found with only this now he would be regarded under privileged, but it was different then because they didn't need as many clothes. In a girls room you might find a trinket box with bracelets, necklaces and earrings. Another box for ribbons combs and scarves. In a girls chest you might find sandals but not boots and if she was daring she might have high-heeled, cork-soled shoes to make here look taller, the Greeks liked tall women. ...read more.