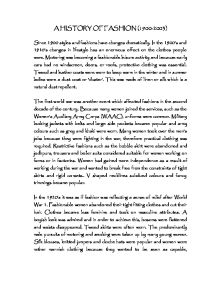 A HISTORY OF FASHION (1900-2003) Since 1900 styles and fashions have changes dramatically. In the 1900's and 1910's changes in lifestyle has an enormous effect on the clothes people wore. Motoring was becoming a fashionable leisure activity and because early cars had no windscreen, doors, or roofs, protective clothing was essential. Tweed and leather coats were worn to keep warm in the winter and in summer ladies wore a dust coat or 'duster'. This was made of linen or silk which is a natural dust repellent. The first world war was another event which affected fashions in the second decade of the century. Because many women joined the services, such as the Women's Auxiliary Army Corps (WAAC), uniforms were common. Military looking jackets with belts and large side pockets became popular and army colours such as grey and khaki were worn. Many women took over the men's jobs because they were fighting in the war, therefore practical clothing was required. Restrictive fashions such as the hobble skirt were abandoned and jodhpurs, trousers and boiler suits considered suitable for women working on farms or in factories. ...read more.

During the war fashions didn't change much, although one dress became popular. It appeared in vogue and looked like it was made up of scarves. This meant that readers could copy this look by sewing together real scarves. Vogue featured many items of clothing that could be made out of old clothes. When the war was over in 1945 designers began to think up new looks. The bikini was invented and new versions of the corset came back into fashion. Stiletto heeled shoes worn with silk stockings and long billowing skirts marked a return to elegance. In the early 1950's men's fashions were to wear black leather jackets, biker boots, levi jeans and T shirts. These were to be worn by people or 'rebels' who had a car, motorbike or scooter. For women simple fabrics such as cotton jersey, denim, and chambray were worn. Neat gingham checks were a popular pattern and wraparound dresses, softly pleated skirts were worn as well. In 1955 when rock and roll arrived young teenegers wore full, knee length skirts with tight elasticated belts worn over layers of nylon net petticoats. ...read more.

Roller-skating and aerobics were extremely popular. Trainers, tracksuits, cycling shorts and leggings were stretchy and comfortable and began to be worn as casual clothing. You could not wear just any sports wear, the correct label was essential. Nike, Adidas and Reebok were the fashionable labels. During the 1980's more and more women were employed in high powered jobs. Margaret Thatcher, who begun her career looking like a housewife soon switched to smart, crisp suits. Power dressing was about being visibly successful in a mans world. Women needed garments that were business like, but at the same time remained elegant. They wore tailored jackets with padded shoulders to emphasise slim hips. Suits came in attention seeking colours or business like pin stripes and were worn with high heels and bright red lipstick. In the early 1990's the 'grunge' style was popular. Combat style trousers, workman's boots and old-fashioned anoraks became the costume of the student population. Flared trousers, hipster trousers, pedal pushers and platform shoes came back into fashion during the 1990's. As did tops that revealed cleavage and hot pants. Fashion is changing all the time and a new style of trouser, skirt or top will become popular every couple of months. Many trends from the 1950's 1960's and 1970's are coming back into fashion. ...read more.