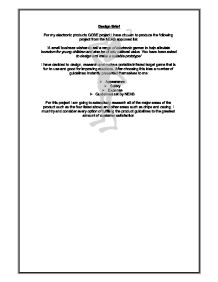 'A small business wishes to sell a range of electronic games to help alleviate boredom for young children and also be of educational value. You have been asked to design and make a suitable prototype'.

Design Brief For my electronic products GCSE project I have chosen to produce the following project from the NEAB approved list. 'A small business wishes to sell a range of electronic games to help alleviate boredom for young children and also be of educational value. You have been asked to design and make a suitable prototype' I have decided to design, research and make a portable infrared target game that is fun to use and good for improving reactions. After choosing this idea a number of guidelines instantly presented themselves to me: > Appearance > Safety > Expense > Guidelines set by NEAB For this project I am going to extensively research all of the major areas of the product such as the four listed above and other areas such as chips and casing. I must try and consider every option of fulfilling the product guidelines to the greatest amount of customer satisfaction. Design Specification This section is going to cover the rough spec of the product I am going to produce. I have compiled a list of points to do this: > The final product must cost less than �10 > The final product must be aesthetically pleasing > The laser emitter must be cased ergonomically > The product must be enjoyable for children > The product must have an ON/OFF switch > The product must have a battery power indicator LED > Mains electricity cannot be used > Battery must be easily accessible > The product must be safe for children to use > The electronic equipment must be housed ...read more.

Warrington Pattern Hammer The warrington pattern hammer is used for light nailing and cabinet making. The shaft of the hammer fits into a shaped socket and is expanded by a wedge so that it cannot fly off. Small Band Saw The small band saw runs from the mains and is very useful for cutting detailed work easily. The band runs at a high speed to that all the operator has to do is feed the wood through. Coping saw The coping saw has a thin blade whose teeth usually point towards the handle so that the saw cuts as it is pulled. Rotating the handle usually tensions the blade. Electronic Component Research This section of my research is going to involve explaining the components that I need to complete my project and the ways in which they are used. Capacitors Capacitors consist of two metal plates separated by an insulator. In larger capacitors these are in the form of long ribbons wound into a cylinder. Capacitance is measured in Farads (F), but because a Farad is such a large measurement capacitors are usually measured in microfarads (�F) or sometimes even smaller quantities. A capacitor also has a working voltage that cannot be exceeded. Non-electrolytic capacitors can be connected either way around in a circuit and typically have a small capacitance of less than (1�F). Electrolytic capacitors can only be connected the correct way around in a circuit. This graph shows how the capacitor charges (shown by the steep, positive slope on the graph) ...read more.

When the code is not being received then the output from pin17 of the second IC is high. The effect of the transistor TR1 is to invert the output from pin17. When pin17 is high the output from the collector of TR1 is low and so IC3 pin1 is low. When the right code is received pin17 of IC2 changes from high to low. So then TR1 is switched off and its collector voltage changes from 0V to positive, this then triggers the monostable made up of NOR gates IC3a and IC3b. The values of resistor R5 and the capacitor C6 define the time that the monostable stays high. The output from the monostable is routed through resistor R6 to the base of the transistor TR2, this then drives the buzzer. The monostable output is also routed through to IC3d pin13. Both of the NOR gates IC3c and IC3d form the astable which, when there is no signal, oscillates normally. The speed of the oscillation is determined by R7 and C7. When the monostable output goes high the astable is 'jammed'. The output from the astable, IC3d pin 11, is delivered to the clock input, pin14, of IC4. The circuit around IC4 is the decade counter. Six counter outputs are used to drive the LEDs with the seventh being used to reset the IC so that the LEDs sequence with no gaps. Only six LEDs are shown on diagram but many more can be used as long as there are a multiple of six. A 4.5V battery must be used rather than a 9V battery. This is because IC1 cannot be used with a Voltage of more than 5.5V. ...read more.