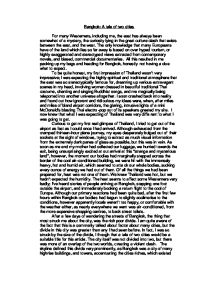 Bangkok: A tale of two cities.

Bangkok: A tale of two cities For many Westerners, including me, the east has always been somewhat of a mystery, the curiosity lying in the great culture clash that exists between the east, and the west. The only knowledge that many Europeans have of the land which lies so far away is based on over hyped tourism, or highly exaggerated and stereotyped views extracted from contemporary novels, and biased, commercial documentaries. All this resulted in me packing up my bags and heading for Bangkok, honestly not having a clue what to expect. To be quite honest, my first impression of Thailand wasn't very impressive; I was expecting the highly spiritual and traditional atmosphere that the east was so stereotypically famous for, dreaming up various extravagant scenes in my head, involving women dressed in beautiful traditional Thai costume, chanting and singing Buddhist songs, and me magically being teleported into another universe altogether. I soon crashed back into reality and found out how ignorant and ridiculous my ideas were, when, after miles and miles of bland airport corridors, the glaring, intrusive lights of a mini McDonald's blasting Thai electro-pop out of its speakers greeted my site. I now knew that what I was expecting of Thailand was very different to what I was going to get. Curious to get my first real glimpse of Thailand, I tried to get out of the airport as fast as I could once I had arrived. ...read more.

If you were to look down from the luxurious comfort of a ninth story apartment, all you would be able to see would be the toxic fumes of pollution which encapsulate and infect the whole city, the grime of the streets which rubs off on every passer-by, the poor people of the city working their hands to the bone to just get by. Essentially Bangkok is a city which is divided into two worlds and levels, the rich and comfortable high rise, contrasting with the struggling street level. An example of the clashing worlds would be a road, where every second shop was jewellerers, containing intricate works of gold, and jaw dropping displays of gems. The whole road was lined with shops, where the cheapest item must have been around �100. All around these shops, within the network of suffocating narrow alleyways, was a swarming market. The alleyways were just wide enough to accommodate a passing car, but the market handlers managed to squeeze in a stall on either side of the pathway, and a gap through the middle, just about enough space to allow three people to squeeze thorough. Here, the pricing of goods was decidedly lower than the pricey road parallel to the market, selling things averaging at the price of �1.00. You could buy a meal for two, satisfying your hunger for hours, for under even �1.00. ...read more.

One word of warning though; if you have a sneaking suspicion that something doesn't taste right, don't eat it. I made this mistake once, and ended up being terribly sick all through the night, and the after effects stayed with me for the rest of the holiday. You can literally buy anything from street-hawkers, as I was once confronted with a cart- full of specially prepared and cooked cockroaches; I wasn't adventurous enough to try that. I do regret that a bit now, as I probably will not ever get the chance to delectate the taste of the worlds most hated insect, but curiosity did kill the cat. Rather curiously, the same nation which condones public displays of affection between couples, such as hand holding, openly accepts the sub-culture of transvestites. This sub-culture is a surprisingly big one in Thailand, and dozens of "lady-men" can be seen around the city during a casual stroll. In a country as liberal as England, many heads would be turned if an outrageously dressed transvestite walked down the street, but in Bangkok its an everyday site. In general these "lady-men" make extremely attractive women, making it very difficult to tell apart the ladies from the men. This results me in having to advise any men looking to go astray in Thailand to be extremely careful, and to not go with the first beautiful woman who approaches you, you may be in for a surprise of your lifetime. Alex. J ...read more.