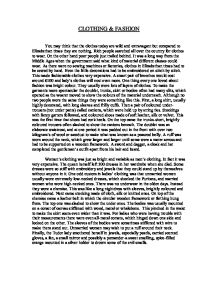 CLOTHING & FASHION You may think that the clothes today are wild and extravagant but compared to Elizabethan times they are nothing. Rich people searched all over the country for clothes to wear. On the other hand poor people just trailed behind. It was a long way from the Middle Ages when the government said what kind of material different classes could wear. As there were no sewing machines or factories, clothes in Elizabethan times had to be sewed by hand. Even the little decorations had to be embroidered on stitch by stitch. This made fashionable clothes very expensive. A smart pair of breeches would cost around �100 and lady's clothes will cost even more. One thing every one loved about fashion was bright colour. They usually wore lots of layers of clothes. ...read more.

A ruff was worn around the neck, which grew larger and larger until some were a meter across and had to be supported on a wooden framework. A sword and dagger, a cloak and hat completed the gentleman's outfit-apart from his hair and beard. Women's clothing was just as bright and variable as men's clothing. In fact it was very expensive. The queen herself left 300 dresses in her wardrobe when she died. Some dresses were so stiff with embroidery and jewels that they could stand up by themselves without anyone in it. One odd custom in ladies' clothing was that unmarried women usually wore extremely low-necked dresses, which shocked the Puritans, and married women who wore high-necked ones. There was no underwear in the olden days. ...read more.