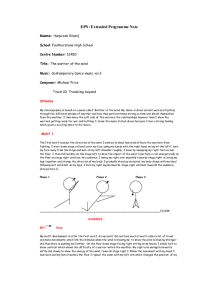 EPN: Extended Programme Note Name: Harpreet Bharij School: Featherstone High School Centre Number: 12430 Title: The warrior of the wind Music: Contemporary dance music vol.3 Composer: Michael Price Track 10: Travelling beyond Stimulus My choreography is based on a poem called "Brother of the wind. My dance is about ancient warriors fighting through the different phases of weather and how they perform these strong actions and shield themselves from the weather. I then show the soft side of the warriors the relationships however then I show the warriors getting ready for war and battling. I chose the music stated above because it has a strong feeling which gives a exciting mood to the dance. Motif 1 The first motif is about the direction of the wind I wanted to show how wind affects the warriors from fighting. I start down stage roll and cover my face using my hands with the right hand on top of the left I turn my face away from the stage and lean on my left shoulder roughly, I move by sweeping my right foot across the floor. I then fall harshly on the stage left to show the impact of the wind; I perform a roll energetically on the floor on stage right and face the audience. ...read more.

It starts of with me sitting on the floor where I swing my left arm twice before I jump up and gradually wiggle twice to show contrast and then I perform the same position as my starting position with my hands across my face, the wriggle in this phase identifies the small amount of frustration the warrior has in regaining the closeness he had before breaking it this keeps the audience interested as it gives a story to the dance. I then form the same bong which was in the motif but I use my arms instead I jump twice to the right I then added a travel I kick my foot up with both my arms reaching. I kick my left foot front and then my right foot towards the side from his movement I warp my arms around my waist strongly; I bend down and perform a leap jump. Motif 3 My last motif is about the ancient warriors described in the poem, for this motif I used strong movement to emphasize the strength of the warriors. My first movement is performed centre stage; I lift my arms up near my waist my head being held up high. ...read more.

The development shows the wind still acting against the warrior this is shown when the warrior swings his arms. Towards the end of the motif there was a sense of victory of the warrior against the wind shown when the warrior stands up but is then forcefully pushed down. In the second motif about closeness and bond I added softer and more delicate movements to suggest the relationship between the warriors as brothers this movement was also a success as I was able to use it in my climax to show the importance of it. Such as the bond being continuously formed and then broken. The last motif is about the ancient warriors within this motif I added powerful armies walk to suggest the ego, strength and proudness within the warriors. I retrograded the development to emphasise how important some of the movements were. My climax was made out of the important key movements taken out of each of the motif, which was then given a travel to make it faster in dynamic. Within this dance I could have used a duo instead which would have emphasized and performed bonds and direction of the wind, within this duo I could have used enough energy to show the movements. ...read more.