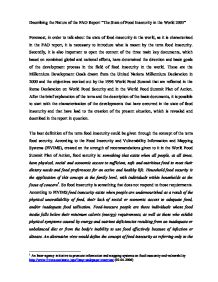 Describing the Nature of the FAO Report &quot;The State of Food Insecurity in the World 2005&quot;

Describing the Nature of the FAO Report "The State of Food Insecurity in the World 2005" Foremost, in order to talk about the state of food insecurity in the world, as it is characterized in the FAO report, it is necessary to introduce what is meant by the term food insecurity. Secondly, it is also important to open the content of the three main key documents, which based on combined global and national efforts, have determined the direction and basic goals of the development process in the field of food insecurity in the world. These are the Millennium Development Goals drawn from the United Nations Millennium Declaration in 2000 and the objectives worked out by the 1996 World Food Summit that are reflected in the Rome Declaration on World Food Security and in the World Food Summit Plan of Action. After the brief explanation of the term and the description of the basic documents, it is possible to start with the characterization of the developments that have occurred in the state of food insecurity and that have lead to the creation of the present situation, which is revealed and described in the report in question. The best definition of the term food insecurity could be given through the concept of the term food security. According to the Food Insecurity and Vulnerability Information and Mapping Systems (FIVIMS), created on the strength of recommendations given to it in the World Food Summit Plan of Action, food security is: something that exists when all people, at all times, have physical, social and economic access to sufficient, safe and nutritious food to meet their dietary needs and food preferences for an active and healthy life. Household food security is the application of this concept at the family level, with individuals within households as the focus of concern1. So food insecurity is something that does not respond to those requierments. ...read more.

Mutual relation between economic growth and hunger reduction is also analyzed in the firs part of the report. Stabile economic growth increases productivity and prosperity at the national level and reduces hunger. According to this statement it would be very tempting to reach the conclusion that in order to reach the targets of MDGs and the WFS, countries only need to accelerate economic growth. But however how tempting it may seem according to this report economic growth is important but not sufficient enough to reduce hunger and that growth in the agriculture sector of developing countries has a much greater impact in reducing hunger than do urban and industrial growth. An FAO study found that it takes longer for economic growth to have an impact on hunger reduction than for improved nutrition to stimulate economic growth7. The first part of the report also discusses the role of governance in hunger reduction. Poverty and undernourishment indicators have fallen significantly faster and farther in places where the political situation is stable, corruption is rare and farm productivity and literacy rates are high. Many of these favorable initial conditions can be regarded as indicators of what is often called "good governance". The impact of good governance on reducing food insecurity can be seen in several countries. In India, for example, the Supreme Court mandated cooked lunches in all of the country's schools. Both nutrition and school attendance have improved dramatically where the program has been implemented, particularly among girls8. The final problem tackled in this part of the report is the complex impact of natural disasters. The impact of natural disasters is much grater on poorer countries than on wealthier ones because their economies and infrastructure are more fragile and vulnerable. Natural disasters tend to have more severe consequences in the poorer regions of the world. This is vividly illustrated by the two recent disasters - the drought and desert locust infestation that harmed North and West Africa in 2003-04, and the Indian Ocean earthquake and tsunami in 2004. ...read more.