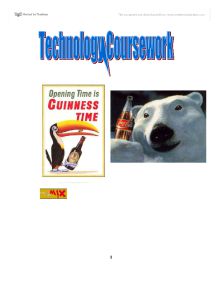 A commercial company requires an electronic advert to display their goods. Design and make an electronic advertisement to do this. What makes an advert appealing? * Colour * Dynamic * Layout * Comedy * Interactivity * Shows the product in a positive form * Catches the consumers eye * Stimulating Colour- Colour is very important in an advertisement as it is normally up to the colouring of the advert to draw the consumers' eye to it. I have discovered a lot of information about colour in my research. Stimulating- My project should be made stimulating as it would help to make the advert more memorable. I could do this by using outputs such as LED's and possibly a buzzer. Using bright colours would also come into here. Dynamic- This would be a mixture of what I said under the headings stimulating and colour. Interactivity- I could a*s this in by possibly making the consumer press a button to activate the outputs. Layout- Possibly a simple layout would be best with an advertisement but one which best shows the product off. Comedy- This would be up to what picture I used or possibly a line of text I put on my project but it is up to what product I wish to advertise. Shows the product in a positive point- My project will have to show the product in a positive way as it would be useless to show it in a negative way if you want people to buy it. LDR- A light dependant resistor changes its resistance to match the light hitting it. When there is a lot of light hitting it its resistance will be low and when there is no light hitting it its resistance will be high. PTB- Push to break switch. Normally this switch is open but by pressing it, the switch opens and stops current from passing through it. ...read more.

This sends an output to the astable which pulses. Its frequency is set by R2, VR2 and C2. Should the resistance drop in variable resistor, VR1 the only the top LED will be lit and it will be constant. The resistance must be increase in VR1 and the switch pressed for the circuit to operate normally, i.e. the Monostable time for a period and control the astable to pulse. Application- This could be used in my project to pulse LED's for a certain time then switch off. It could be activated by a switch in a mat and light up a sign for half a minute. As a PIC circuit cannot be transferred into Microsoft Word I shall recreate one using a normal flow diagram. This PIC circuit is quite simple and works like this; if the switch isn't pressed then the PIC will basically wait for it to be pressed. When it is pressed 2 LED's will switch on and will stay on for 2 seconds then will switch off and 2 more will turn on. After 2 seconds the circuit will reset My finished circuit is going to be a chaser circuit, i.e. an astable circuit combined with a 4017 chip. There is a formula for calculating the rate at which the astable chip pulses the 4017 and it is: I am now going to calculate the value of R2; my variable resistor. 1 = 1.44 / (0.001 + 2R2) x 100 0.1 + 20R2 =1.44 20R2 = 1.43 R2= 0.0715M? My finished project will require several different types of circuits linked together. Below are the system diagrams of some circuits which I could join together. This combination allows my circuit to pulse a series of LED's for a set time before stopping. This can only be reset by pressing the switch. The above systems diagram shows a Chaser circuit which lights LED's in order one after the other while the switch is on. ...read more.

There are several scales of production when manufacturing. One off production - This is when only one product is made at the time. Usually takes some time and the costs are usually quite high. Batch production- When a series of the same products are made together in small or large quantities; once made the same workforce may produce another series of products. Mass production- This is when the product is to be produced in large numbers for several weeks or months at a time. A relatively large workforce works on an assembly line, where different groups of workers are responsible for each part of the product. If I were to batch produce 100 of my product I would use vacuum forming to create the main body of my product. This is done by first creating a mould of my product, which is then vacuum formed: forcing heated plastic to cover the mould by creating a vacuum. The mould itself can be removed and used over and over again. The moulded plastic can then have the electronics and materials built onto it. The environment As with all forms of manufacturing, there is some pollution to the environment from the creation of my project; i.e. scrap materials such as wires, wood, plastic. Also at some stage my project is ultimately going to be binned which again pollutes the environment. Also the use of machines to create my project would have used up electricity which ultimately pollutes the environment. If I were to mass produce this product, or any other there are several things I could do to help reduce pollution on the environment. * Reduce the amount of raw materials used to a minimum. * Use as much biodegradable materials as possible. * Reuse as much materials as possible. * Reduce the amount of electricity used in the creation of my project to a minimum. * Make sure no material in my project is potentially toxic, which later will seep into the environment when in a landfill site. * Make my project rechargeable battery friendly. ?? ?? ?? ?? 1 ...read more.