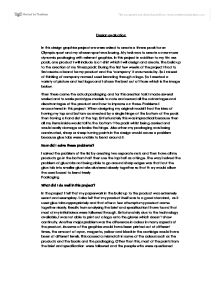 Design evaluation In this design graphics project we were asked to create a fitness pack for an Olympic sport and my chosen sport was boxing. My task was to create a new more dynamic packaging with relevant graphics. In this project in addition to my fitness pack, one product I will include is a t-shirt which I will design and create. The build up to the creation of my fitness pack: During the first few weeks of the project I had to first create a brand for my product and the 'company' it was made by. So instead of thinking of company names I used branding through a logo. ...read more.

Unfortunately this was impractical because then all my items inside would fall to the bottom f the pack whilst being carried and would easily damage or broke the hinge. Also when my packaging was being constructed, sharp or steep turning points in the design would cause a problem because glue tabs were unable to bend around it. How did I solve these problems? I solved the problem of the lid by creating two separate nets and then have all my products go in the bottom half then use the top half as a hinge. The way I solved the problem of glue tabs not being able to go around sharp edges was that I cut the glue tab into smaller glue tabs clustered closely together so that they would allow the card board to bend freely Packaging What did I do well in this project? ...read more.

Results from analysing the brief and specification I have found that most of my initial ideas were followed through. Unfortunately due to the technology available, I was not able to print out a logo onto the gloves which doesn't show continuity. Another major problem was the difference in colour in many aspects of the product. As some of the graphics would have been printed out at different times, the amount of cyan, magenta, yellow and black in the cartridge would have been at different levels. This caused a mismatch in some of the colours such as the products and the books and the packaging. Other than this, most of the points from the brief and specification were followed and the people who were questioned were very happy with the product. Generally my package has proven to be a success! ...read more.