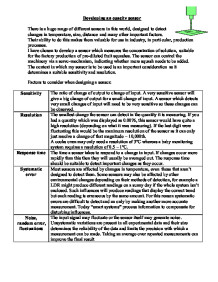 Developing an opacity sensor There is a huge range of different sensors in this world, designed to detect changes in temperature, size, distance and many other important factors. Their ability to do this makes them valuable for use in industry, in particular, production processes. I have chosen to develop a sensor which measures the concentration of solution, suitable for the factory production of pre-diluted fruit squashes. The sensor can control the machinery via a servo-mechanism, indicating whether more squash needs to be added. The context in which my sensor is to be used is an important consideration as it determines a suitable sensitivity and resolution. Factors to consider when designing a sensor: Sensitivity The ratio of change of output to change of input. A very sensitive sensor will give a big change of output for a small change of input. A sensor which detects very small changes of input will need to be very sensitive so these changes can be observed. Resolution The smallest change the sensor can detect in the quantity it is measuring. If you had a quantity which was displayed as 0.0076, this sensor would have quite a high resolution (depending on what it was measuring). If the last digit were fluctuating this would be the maximum resolution of the sensor as it can only just resolve a change of that magnitude - 10,000th. A cooks oven may only need a resolution of 5�C whereas a baby monitoring system requires a resolution of 0.5 - 1�C. Response time The time a sensor takes to respond to a change in input. ...read more.

Preferably, the tube would be just below the surface however this would mean moving the LDR nearer to the light source with each solution, which, as explained earlier, is unfavourable. The battery for both the lamp and LDR will be switched on and a reading taken from the voltmeter and recorded. 50 ml of solution will then be added from the second beaker to raise the level to 100ml and another reading recorded. This will be repeated to 200ml . I must also consider safety as electricity and water are a dangerous combination. I will minimise the risk of electrocution by: * Removing the beaker from on top of the lamp and away from other apparatus before adding more solution. * Turning off the power pack between additions of solution. * I will dry my hands before touching the wires and other electrical apparatus. * The voltage will be kept low which will not minimise the risk of electrocution but will minimise danger. Hypothesis: The more light falling on the LDR, the less its resistance. So as volume increases, voltage increases as less light reaches the LDR and resistance increases. As the components are in a series circuit (same current flows through variable resistor and LDR - no alternative route) the voltage across the LDR increases. This can be explained by: V=I x R If the current is 2A and resistance 0.5 ohms then V = 1 If the current is 2 A and resistance 1.5 ohms then V = 3 Predicted Results - I had to first take a reading at 50ml and then 200ml to determine a suitable range. ...read more.

My sensor is therefore sensitive enough to detect concentration changes of 1%. However the voltage change is not uniform, it varies between 0.06 to 0.09, a range of 0.03. As the variation in V change shows no trend, I can conclude that the relationship between volume of squash (concentration) and voltage is linear. This variation in voltage change is most likely to have been caused by small alterations in apparatus. It is unlikely to be caused by the resolution of my sensor; if the sensor was only just able to resolve voltage changes to one hundredth of a volt then the variation would only be of 100th of a volt, not 3 � 100th of a volt as can be seen in my results. By calculating an average voltage change, to eliminate the effect of changes in apparatus, I can determine the sensitivity of my sensor: (0.06 + 0.07 + 0.08 + 0.09) � 4 = 0.075 resolution only to 100th so 0.08V/1% variation in concentration However, taking into account the apparatus will affect the voltage readings, a change of 0.06 V would need to initiate the addition of more solute as this would be the minimum change for 1% concentration increase. In conclusion, I believe I have achieved my aim of creating a suitable sensor for detecting variations in squash concentration. It is sensitive enough to detect relevant concentration variations and also means that a resolution of 0.00V is sufficient. I recognise that my sensor had structural faults; the apparatus had to be constantly adjusted between readings, but with the equipment available this fault couldn't be rectified. ?? ?? ?? ?? ...read more.