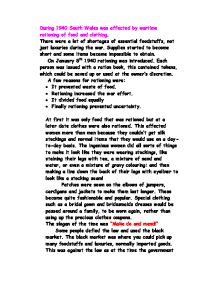 During 1940 South Wales was affected by wartime rationing of food and clothing.

During 1940 South Wales was affected by wartime rationing of food and clothing. There were a lot of shortages of essential foodstuffs, not just luxuries during the war. Supplies started to become short and some items became impossible to obtain. On January 8th 1940 rationing was introduced. Each person was issued with a ration book, this contained tokens, which could be saved up or used at the owner's discretion. A few reasons for rationing were: * It prevented waste of food. * Rationing increased the war effort. * It divided food equally * Finally rationing prevented uncertainty. At first it was only food that was rationed but at a later date clothes were also rationed. This affected women more than men because they couldn't get silk stockings and normal items that they would use on a day-to-day basis. ...read more.

This was against the law as at the time the government was promoting posters to make people dislike the black market; Source (A2 C) shows me this. A young girl from Newport explains how "The government made us all hate the Back Market." As food was rationed and ships were needed for the war effort there were many propaganda posters encouraging and promoting home-grown foodstuffs. Source (A2 B) a wartime propaganda poster tells us that potatoes were full of goodness and gave energy. This sources weakness is that it is a propaganda poster and the truth could have been stretched. Also Source (A2 A) promotes home grown potatoes. Both posters would have been effective, as people would have seen them everywhere, from billboards to newspapers. ...read more.

Then when fat enough the pigs could be eaten. This would also have been a very effective propaganda poster (even though the poster being a propaganda poster is a weakness) I t is very persuasive and would have been placed on billboards, in newspapers and people would see it when visiting the cinema. Overall people in South Wales were badly affected by wartime rationing, although not quite as bad as Germany (they had no ration books or ANY variety) People in South Wales could still have a small variety of foods even though it did become quite monotonous. They were unable to buy some essential things and thus resorted to the black market, which again enabled more variety. People were fined for wasting food and propaganda was used extensively to persuade and encourage people to save food and used home grown foodstuffs instead. People didn't have new clothes and the slogan of the time ("Make do and Mend") was very adequate. ...read more.