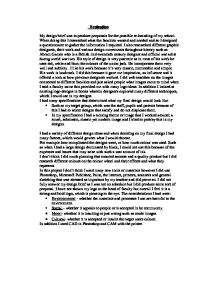 Evaluation - produce proposals for the possible re-branding of my school

Evaluation My design brief was to produce proposals for the possible re-branding of my school. When doing this I researched what the faculties wanted and needed and so I designed a questionnaire to gather the information I required. I also researched different graphic designers, their work and various design movements throughout history such as Abram Games who is a British mid-twentieth century designer and official war artist during world war two. His style of design is very patriotic as in most of his work he uses red, white and blue; the colours of the union jack. He incorporates them very well and subtlety. ...read more.

I had many specifications that determined what my final design would look like. * Such as my target group, which was the staff, pupils and parents because of this I had to select designs that satisfy and do not displease them. * In my specification I had a running theme or image that I worked around; a smart, scholastic, classic yet modern image and I tried to portray this in my designs. I had a variety of different design ideas and when deciding on my final design I had many factors, which would govern what I would choose. For example how complicated the designs were, or how much colour was used. ...read more.

I did not fully answer my design brief as I was not on schedule but I did produce some sort of proposal. I have not shown my logo to the head of faculty but overall I feel it is a strong and bold logo, which is pleasing to the eye. The considerations I had were: * Environmental - whether the materials and processes I use are harmful to the environment. * Social - whether it appeals to people or is accepted in he community. * Moral- whether it is insulting or just wrong such as crude images. * Cultural- whether it is accepted or insults the target users culture. In addition I used CAD in Photoshop and CAM with the printer. ...read more.