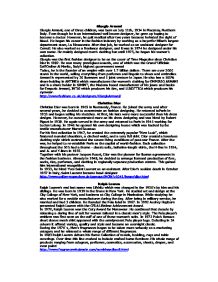 Giorgio Armani Giorgio Armani, one of three children, was born on July 11th, 1934 in Piacenza, Northern Italy. Even though he is an international well known designer, he grew up hoping to become a doctor. However, he quit medical after two years because he hated the sight of blood. He began his career in the fashion industry by working as a buyer for Milan's largest department store, La Rinascente. After that job, he worked as an assistant designer for Cerruti. He also worked as a freelance designer, and it was in 1974 he designed under his own name. He mainly designed men's clothing but until 1975, he began his women's collection. Giorgio was the first fashion designer to be on the cover of Time Magazine since Christian Dior in 1982. He won many prestigious awards, one of which was the Grand 'Ufficiale Dell'Ordine Al Merito, Italy's highest government award Today, he is the founder of an empire with over 1.7 billion dollars. There are over 2000 stores in the world, selling everything from perfumes and lingerie to shoes and umbrellas. Armani is represented by 20 licensees and 1 joint venture in Japan. He also has a 100% share holding in ANTINEA which manufactures the women's clothing for EMPORIO ARMANI and is a share holder in ...read more.

M. Williams Reginald Murray Williams was born in 1908 at Belalie North in Australia. He was born into a pioneer settler's family living in the bush where there was no water and electricity. At 10, his family moved to Adelaide so he and his sisters could go to school. He didn't like school so he left home at 15. He married Thelma Mitchell and they decided to return to the Flinders Ranges. Dollar Mick, a clever craftsman taught R.M. how to do complicated leatherwork making: leather bridles, pack saddles and boots. In 1932 RM's child developed a disease. Hospital treatment cost money, so he went to see Sir Sidney Kidman showing him his leatherwork. Kidman agreed to buy his saddles. With the money, R.M. set up a small factory in his father's shed back in Adelaide. As word spread about R.M. Williams Bushmen products, he had to borrow money to expand his business to keep up with the orders. He was soon deep in debt. But one day a woman that owned a gold mine near Tennant Creek offered to sell it to R.M. for seventy two thousand pounds. R.M. bought it and eventually they hit gold - so much gold that their mine, 'Nobles n*b' became one of the richest small gold mines in Australia. ...read more.

http://www.dolcegabbana.it/eng/main.asp Versace Gianni Versace was born in Reggio Calabria, Italy, on December 2, 1946. After an apprenticeship at his mother's dressmaking business, he began working as a freelance designer. At age 25, Versace was creating pr�t-a-porter collections for top fashion houses of the time, including Genny, Complice and Callaghan. In 1978, with the help of his brother, Santo, he founded the Gianni Versace Company. The Italian parent company of the Versace Group, Gianni Versace S.p.A., designs, markets and distributes luxury clothing, accessories, fragrances, makeup and home furnishings under the various brands of the Versace Group. These brands include: Versace, Versus, Versace Jeans Couture, Versace Classic V2, Versace Sport, Versace Intensive, Versace Young and Palazzo Versace. Versace's Style Department employs a group of designers and stylists who work in teams specifically dedicated to each individual line. All of these teams operate under the close supervision and guidance of Creative Director, Donatella Versace, Gianni's younger sister. Versace collections are distributed through a network of 240 exclusive boutiques, over 150 dedicated spaces in major department stores and duty-free areas, as well as a number of selective multi-brand boutiques in 60 countries. The Versace Group directly employs 1,500 people and provides indirect labour for an additional 5,000 worldwide. With a solid international presence, the Versace Group boasted sales in excess of 822 billion lira and net earnings of 18 billion lira in the 1999 fiscal year. http://www.versace.com/flash.html ...read more.