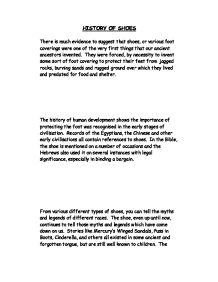 HISTORY OF SHOES There is much evidence to suggest that shoes, or various foot coverings were one of the very first things that our ancient ancestors invented. They were forced, by necessity to invent some sort of foot covering to protect their feet from jagged rocks, burning sands and rugged ground over which they lived and predated for food and shelter. The history of human development shows the importance of protecting the foot was recognised in the early stages of civilisation. Records of the Egyptians, the Chinese and other early civilisations all contain references to shoes. In the Bible, the shoe is mentioned on a number of occasions and the Hebrews also used it on several instances with legal significance, especially in binding a bargain. ...read more.

In form and ornamentation it reflects the environment in which it was worn, together with the artistic tastes of the people at the time. In some countries the sandal continues to be the same simple kind worn since the dawn of history, while in others the multiple form of the straps and beautiful decorative work reflect the artistry, progress and prosperity of the wearers. The Japanese, long sandal wearing people, indicated the social status of the wearer by making distinctive sandals for Imperial Household, m merchants and actors, in fact, for the whole range of occupations and professions. The Greek emphasised design and beauty, while the Romans devised a military type of sandal that enabled their legends to travel on foot. In the more luxurious days of the late Empire the sandals were often beautifully shaped with ornaments of gold and precious stones. ...read more.

As late as 1850 most shoes were made on absolutely straight lasts, with no difference between the left and the right shoe. Up until 1850 all shoes were made with practically the same hand tools that were used in Egypt as early as the 14th century B.C as a part of a sandal maker's equipment. The shoe makers of the thirty- three intervening centuries had added only a few simple tools such as the princers, the lapstone, the hammer and a variety of rubbing sticks used for finishing edges and hells. So, shoes were invented from our ancient ancestors, who invented them as they proved to be a necessity. From looking at various different shoes, we can tell various different myths and legends. From time the shapes of shoes changed and the style. As an addition to my coursework I have also added a timeline of how the different styles of shoes came about. ...read more.