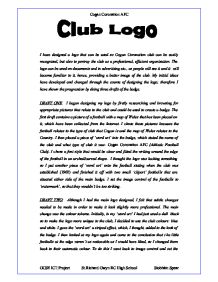 I have designed a logo that can be used so Cogan Coronation club can be easily recognised, but also to portray the club as a professional, efficient organisation.

I have designed a logo that can be used so Cogan Coronation club can be easily recognised, but also to portray the club as a professional, efficient organisation. The logo can be used on documents and in advertising etc., as people will see it and it will become familiar to it, hence, providing a better image of the club. My initial ideas have developed and changed through the course of designing the logo; therefore I have shown the progression by doing three drafts of the badge. DRAFT ONE: I began designing my logo by firstly researching and browsing for appropriate pictures that relate to the club and could be used to create a badge. The first draft contains a picture of a football with a map of Wales that has been placed on it, which have been collected from the Internet. I chose these pictures because the football relates to the type of club that Cogan is and the map of Wales relates to the Country. I then placed a piece of 'word art' into the badge, which stated the name of the club and what type of club it was: Cogan Coronation AFC (Athletic Football Club). I chose a font style that would be clear and fitted the writing around the edge of the football in an arched/curved shape. ...read more.

When I had done this, the badge was complete and a new logo had been created for Cogan Coronation, allowing the club to be recognised as a professional organisation. I also made sure that I 'grouped' the logo. This would allow me to paste the logo onto future documents easily, without being awkward. I could transfer the whole logo rather than just a bit at a time. After a right click on the mouse, this is what I did: This is a simple process, but time saving. If, however you want to go back and modify the logo, clicking on 'ungroup', which lies directly under 'group', can easily reverse it. I have designed a club business card that is recognisable and can be used to promote the club. It gives the details of the club and can be distributed to those who need to be in contact with the club (e.g. other football teams). This business card will be good for the club, making it look professional and allowing people to organise events, matches etc. at the club. Once again, I have produced three drafts of the card as ideas have changed and developments have been made in the process of producing a high quality, professional business card. ...read more.

I changed the image control of the image and set it to watermark so that it could be seen, but the details could be clearly read and it didn't look unprofessional. DRAFT THREE: To improve the clubs business card for the final time, I firstly changed the layout of the clubs details. I took out the words 'E-mail' and 'Tel', but replaced them with little symbols that represent them. I think that this gives a professional look to the card. I then changed the font to 'italic' because I preferred it like this. I moved these details over slightly along with the 'word art' at the top (AFC) in order to make a little bit of room for my final change. I found a picture that I thought would look good in the background of a business card, but because it wasn't available to me on the computer, I had to scan it in. When I had done this, I was able to manipulate the picture until it looked the way I wanted it to look. I cut the Welsh dragon down to size and modified the image control to watermark before placing it behind the text and 'word art' on my card. I then analysed it and decided that no more changes were necessary because it was now complete. Cogan Coronation AFC GCSE ICT:Project St.Richard Gwyn RC High School Siobh�in Spear ...read more.