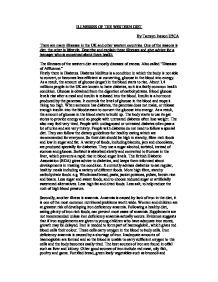 Illnesses of the Western diet

ILLNESSES OF THE WESTERN DIET By Tamsyn Iveson U5CA There are many illnesses in the UK and other western countries. One of the reasons is diet, the other is lifestyle. Describe and explain these illnesses and give advice for a teenager who is concerned about there health. The illnesses of the western diet are mostly diseases of excess. Also called "Diseases of Affluence." Firstly there is Diabetes. Diabetes Mellitus is a condition in which the body is not able to convert, or becomes less efficient at converting, glucose in the blood into energy. As a result, the amount of glucose (sugar) in the blood starts to rise. About 1.4 millions people in the UK are known to have diabetes, so it is a fairly common health condition. Glucose is obtained from the digestion of carbohydrates. Blood glucose levels rise after a meal and insulin is released into the blood. Insulin is a hormone produced by the pancreas. It controls the level of glucose in the blood and stops it rising too high. When someone has diabetes, the pancreas does not make, or release enough insulin into the bloodstream to convert the glucose into energy. ...read more.

Occasionally a patient is so weak that they are put into hospital against their will in order to try to save them. They have to stay in bed and are given food regularly in the hope that they will gradually put on weight. Much patience and understanding is needed if the treatment is to have any chances of success. The other psychological illness is Anorexia. Anorexia nervosa is sometimes known as the slimming disease. A person suffering from this disease uses food as a way of expressing unhappiness. This is a serious disease which mainly affects teenage girls, although the problem is spreading to younger and older women and to men. Someone suffering for anorexia nervosa becomes obsessional about body size. After a time, they become very thin, their lifestyle suffers and in women the periods stop. People suffering from anorexia often become depressed and may develop other health problems as a result of under nutrition. Sufferers require long term specialist help from psychiatrists and dieticians, as well as support from their family and friends. A person with anorexia refuses to eat enough to maintain their body weight for their age and height. ...read more.

Women are most at risk from osteoporosis, but it can also affect men. Vitamin D will also help aid absorption of calcium. Evidence seems to show that a diet with a good supply of calcium, particularly during childhood and teenage years, together with regular exercise may help protect against osteoporosis. Avoiding smoking and drinking excessive amounts of alcohol are important. Good sources of calcium are cereals, which contain substance called phytates and spinach which contains substances called oxalates. If they are present in the diet in large quantities both these substances can hinder the absorption of calcium from foods. Elderly people are advises to avoid eating raw bran as the phytate present in the bran can block important mineral absorption. Phytates and oxalates can also hinder the absorption of other nutrients such as zinc. Also other good sources are milk, nuts, yoghurt, dried fruits, white bread and green leafy vegetables. The RNI for calcium is 700mg a day for adults. Teenagers need more- 1000mg a day for boys and for girls 800mg. Women who are breast feeding need almost twice as much calcium in their diet to help with their milk supply for their baby. Overall, I think this shows clearly how to prevent these illnesses and for any one that is worried about their health they should seek medical advice. ...read more.