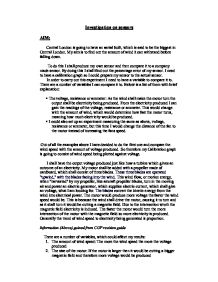 Investigation on sensors AIM: Central London is going to have an aerial built, which is said to be the biggest in Central London. My aim is to find out the amount of wind it can withstand before falling down. To do this I shall produce my own sensor and then compare it to a company made sensor. By doing this I shall find out the percentage error of my sensor. I need to have a calibration graph so I could prepare my sensor to the actual sensor. In order to carry out this experiment I need to have a variable to compare it to. There are a number of variables I can compare it to. Below is a list of them with brief explanation: * The voltage, resistance or ammeter: As the wind shall make the motor turn the output shall be electricity being produced. From the electricity produced I can gain the readings of the voltage, resistance or ammeter. This would change with the amount of wind, which would determine how fast the motor turns, meaning how much electricity would be produced. * I could also set up an experiment measuring the same as above, voltage, resistance or ammeter, but this time I would change the distance of the fan to the motor instead of increasing the fans speed. Out of all the examples above I have decided to do the first one and compare the wind speed with the amount of voltage produced. So therefore my Calibration graph is going to consist of wind speed being plotted against voltage. I shall have the output voltage produced just like how a turbine which gives an outcome of an electricity. ...read more.

Also there wasn't enough time for me to repeat the experiment and that is also a disadvantage since I can't make my results more reliable. Therefore from the apparatus list above I also used a cork and also an actual propeller. Method: 1. First I shall take all the safety into account 2. Then I shall get all the apparatus and set it out like in my diagram above (having the company made propeller attached to the motor) 3. I shall then start the fan and measure the speed of the wind produced by the fan at the first stage 4. After than I shall put forward my motor so it is facing the fan and therefore the motor spinning and producing a voltage Results: Wind Speed 0 0.5 0.6 0.7 Voltage 0 2.0 2.5 3 I have only conquered three set of results because the variable which I was changing was the wind speed on the fan and I had only three on the fan including the at the start when not running. However as you can see on my graph (next page) I have extended my line according to the best fit a bit. I haven't increased the line to much due to maybe the graph being a curve further on as the wind speed increases the voltage goes down, so therefore my graph is not that reliable since I have made assumptions. Even though my scientific explanation above proves that as the wind-speed shall increase the voltage is expected to increase I have not assumed that it shall always increase. Now that I have produced a tested my own made sensor and from it I made a calibration graph, now I can go and test my sensor to the actual company made sensor and find out the percentage error. ...read more.

To have more wind speed and voltage reading for my calibration graph, so I could actually prove that it is a strong positive correlation graph Conclusion: From the average percentage error I believe that my made sensor could be used to decide on how much wind the aerial can withstand before falling down. Also from my results I have come to quite a few conclusions on where the aerial should be placed: 1. It should not be placed high above ground. High above ground level, at a height of about 1 kilometre, the wind is hardly influenced by the surface of the earth at all. In the lower layers of the atmosphere, however, the friction against the surface of the earth affects wind speeds. Also by fitting the aerial to the bottom maximises the disturbances of airflows from the mast itself. 2. The aerial should not be placed between buildings. As you can see from my results that between buildings has one of the highest wind speed due to the air becoming compressed, on the windy side of the buildings, and its speed increases considerably between the obstacles to the wind. This is known as a "tunnel effect". 3. It should be placed around Obstacles to the wind such as buildings, trees, rock formations etc. can decrease wind speeds significantly, and they often create turbulence in their neighbourhood. As you can see from this drawing of typical wind flows around an obstacle, the turbulent zone may extend to some three times the height of the obstacle. The turbulence is more pronounced behind the obstacle than in front of it. 4. It would be a good idea to have the aerial surrounded by trees since a tree with leaves will brake the wind. It has a very low porosity. ...read more.