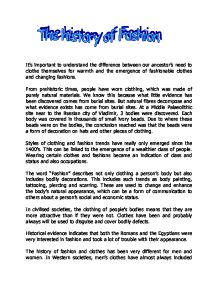 It's important to understand the difference between our ancestor's need to clothe themselves for warmth and the emergence of fashionable clothes and changing fashions.

It's important to understand the difference between our ancestor's need to clothe themselves for warmth and the emergence of fashionable clothes and changing fashions. From prehistoric times, people have worn clothing, which was made of purely natural materials. We know this because what little evidence has been discovered comes from burial sites. But natural fibres decompose and what evidence exists has come from burial sites. At a Middle Palaeolithic site near to the Russian city of Vladimir, 3 bodies were discovered. Each body was covered in thousands of small ivory beads. Due to where these beads were on the bodies, the conclusion reached was that the beads were a form of decoration on hats and other pieces of clothing. Styles of clothing and fashion trends have really only emerged since the 1400's. This can be linked to the emergence of a wealthier class of people. Wearing certain clothes and fashions became an indication of class and status and also occupations. The word "Fashion" describes not only clothing a person's body but also includes bodily decorations. This includes such trends as body painting, tattooing, piercing and scarring. These are used to change and enhance the body's natural appearance, which can be a form of communication to others about a person's social and economic status. In civilised societies, the clothing of people's bodies means that they are more attractive than if they were not. Clothes have been and probably always will be used to disguise and cover bodily defects. Historical evidence indicates that both the Romans and the Egyptians were very interested in fashion and took a lot of trouble with their appearance. The history of fashion and clothes has been very different for men and women. ...read more.

Women began to wear their hair shorter and make up was available to most women. Shoes changed too from both practical boots and dainty indoor shoes to more affordable and mass-produced footwear. These changes meant that women could move about more easily. The end of this war brought many changes to clothes. Fashions changed more quickly and by the 1920s, dresses were shorter and straighter. Women's shoes had high heels and more pointed toes. Skirts and blouses became fashionable as more women went to work Men and women still wore hats and gloves for every day wear. Clothes also became more seasonal and were made of lighter fabrics. Wealthy people had lots of different out fits for every social occasion. There were many of these such as the races, boating and going out to tea. These all needed special clothes and rich men and women kept their tailors and seamstresses hard at work. Clothes made in this way were not mass-produced as clothes are today. The wealthy had their clothes and shoes made to fit them only, whilst poorer people had cheaper and less well-made ones for them. In the years between the wars, fashions continued to change as people's lives changed too. Men and women worked and went out in the evenings and at weekends. So different types of clothing were needed. In the upper and middle classes people attended b***s and the women wore gowns of silk and satin. Men wore Tailcoats and white gloves and even the less well off went to dances. Entertainment such as the Theatre and Opera was another reason for the well off to dress up. The outbreak of the second world war in 1939 changed people's lives probably more than any other event in the 20th century. ...read more.

I think that the 20th century saw the greatest changes in fashion of any other century. At the beginning Queen Victoria was still the Queen and she was from the Victorian age. When she died people got a little more freedom and after the first world war, women were allowed to vote for the first time. Fashions changed because people wanted them to. Then the second world war meant men went out to fight and women went out to work. This gave women more contact with the world of work and fashion and even thought they had clothing coupons, women wanted to be fashionable. Then came the 1960s and rock and roll, clothes changed so quickly that people could hardly keep up with the trends. The following years brought changes in the use and feel of fabrics as more people needed clothes for different activities. One of the 20th century's inventions that has changed clothing and clothing styles, is Lycra. It was invented in 1959 by Dupont and has over the last 40 years, become a leading fashion material. It has changed the stretchability of fabrics. Lycra is not just one fibre but many. Each one has been made to provide the exact combination of fibre thickness, texture, colour and stretch for the garment being made. Recently, Lycra has been up dated so that it can be combined with soft shaping and body-hugging designs. It can now be added to almost every type of fibre and fabric to produce clothes that fit snugly. It can even be added to leather for shoes. Lycra is now a household name and has become part of the way we live. The fashion industry has been very quick to use it in such things as jeans and T' shirts and especially in sports wear. Its uses seem to be endless 8 1 ...read more.