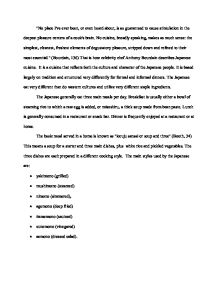 "No place I've ever been, or even heard about, is as guaranteed to cause stimulation in the deepest pleasure centers of a cook's brain. No cuisine, broadly speaking, makes as much sense: the simplest, cleanest, freshest elements of degustatory pleasure, stripped down and refined to their most essential." (Bourdain, 136) That is how celebrity chef Anthony Bourdain describes Japanese cuisine. It is a cuisine that reflects both the culture and character of the Japanese people. It is based largely on tradition and structured very differently for formal and informal dinners. The Japanese eat very different than do western cultures and utilize very different staple ingredients. The Japanese generally eat three main meals per day. Breakfast is usually either a bowl of steaming rice to which a raw egg is added, or misoshiru, a thick soup made from bean paste. Lunch is generally consumed in a restaurant or snack bar. Dinner is frequently enjoyed at a restaurant or at home. The basic meal served in a home is known as "iccuju sansai or soup and three" (Booth, 34) This means a soup for a starter and three main dishes, plus white rice and pickled vegetables. ...read more.

One of the most widely known types of Japanese food is sushi. Sushi combines seasonal seafood and rice, the staple diet of the Japanese people. A wide variety of vegetables can be used. Sushi is eaten with the fingers, often as a snack. The three types of sushi are: "Nigiri-Zushi, vinegared rice with raw or cooked fish, seafood or eggs, garnished with wasabi; Norimaki-Zushi, vinegared cooked rice and tiny tidbits of fish, seafood, or meat and edible seaweed or laver rolled up like a jelly roll and cut into into bite sized pieces; Chirashi-Zushi, the most artful and complex sushi of all, made from nine ingredients prepared in nine special steps."(Saber, 274) The staples of Japan are clearly recognizable to anyone familiar with Japanese food. The staple grain of Japan is definitely rice although noodles are also very popular. The main protein in Japan is fish. "Each Japanese adult eats more than 154lbs of fish a year" (Ridgewell, 9) Tofu or soybean curd is so popular that it rivals fish as the staple protein. The Japanese use very little fat in their diet and when they do it is usually in the form of seed oil. ...read more.

The legal drinking age in Japan is 20, but alcoholic drinks are readily available in public vending machines, which carry a variety of drinks including cold beer and hot or cold sake. The most apparent connection between food and religion is vegetarianism. It is the result of the Buddhist prohibition on killing living things. Interestingly, vegetarianism in Japan does not preclude the eating of fish. Food in Japan plays a big part in holiday celebrations. New Year is the most important festival celebrated in Japan. Special foods called osechi-ryori, are eaten during this time. Zoni a soup made of pounded rice cakes, vegetables and fish or chicken and toso served with spiced sake is very popular. Sweet black beans and pink rice made with red azuki beans are New Year favorite. New Year foods are served in lacquered boxes called jubako. February 4 is Stesburn during which, "people throw roasted soybeans from their doorways and say oniwa soto or 'Go away devils' and fukuwa uchi or 'come in good fortune' and then eat one bean for every year of their lives."(Ridgewell, 28) March 3 is the girls festival. "Special colored rice cakes and amazake a sweet drink made from rice." (Ridgewell, 28) May 5, Childrens day features "rice dumplings filled with sweet bean paste and a rice dumpling wrapped in bamboo and tied with string. ...read more.