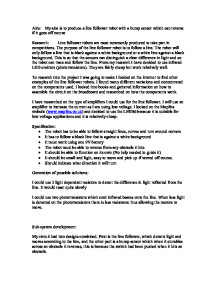 Aim: My aim is to produce a line follower robot with a bump sensor which can reverse if it goes off course Research: Line follower robots are most commonly produced to take part in competitions. The purpose of the line follower robot is to follow a line. The robot will only follow a line that is black against a white background or a white line against a black background. This is so that the sensors can distinguish a clear difference in light and so the robot can trace and follow the line. From my research I have decided to use infrared LED emitters (phototransistors). They are fairly cheap but work relatively well. To research into the project I was going to make I looked on the internet to find other examples of the line follower robots. I found many different variations and concentrated on the components used. I looked into books and gathered information on how to assemble the circuit on the breadboard and researched on how the components work. I have researched on the type of amplifiers I could use for the line follower. I will use an amplifier to increase the current as I am using low voltage. ...read more.

This also means that if less light is on the LEDs, or no light, there is high resistance, little current passes through the circuit. The motors do not move resulting in the robot being stationary. So in my circuit the phototransistors are constantly shining down. So when the infrared is being emitted on the white background it reflects the light so the LEDs sense light reflected on them. This makes the motors free to move and so the robot follows the line. When the robot reaches a corner in the line, it will turn towards the line. This is because when it reaches a turning point, one of the phototransistors is reflecting on the white background while the other on the black background. The colour black absorbs light; the infrared beam is being emitted on the black line is not being reflected back. The motor connected to the LED on the black line will slowdown and eventually stop. The LED on the white background however is getting light reflected on it because the colour white has the ability to reflect all light. The motor connected to the LED on the white background is running. ...read more.

This showed that the robot works as it followed the light. I also used an ammeter to check the current passing through the circuit. This confirmed that my circuit was working correctly. When I covered the phototransistors the there was around 0.4 A passing through. However, when I applied light onto the phototransistors (using an ordinary LED) I noticed that the reading on the ammeter was 8.6 A. this proves my theory that covering the phototransistors, it increases the resistance. Evaluation: My circuit works well and follows my specification. The motors move forward when light is placed and it and slow down when no light is present on the phototransistors. * Robot has the ability to move in s straight line, around curves and turn corners. * With the photo transistors it can follow a black line against a white background. * It works using a 9V battery * It has a relay which reverses the direction of the motors turning so it can move away from obstacles * It doesn't require anyone to move it or guide it using a remote control. * It is light and easy to move so when it goes of course I am able to put it back on the line * Has two LEDs which indicate what direction it is turning ...read more.