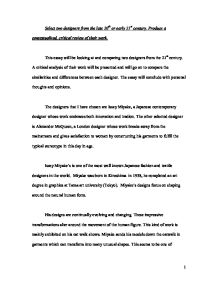 Select two designers from the late 20th or early 21st century. Produce a contextualized, critical review of their work.

Select two designers from the late 20th or early 21st century. Produce a contextualized, critical review of their work. This essay will be looking at and comparing two designers from the 21st century. A critical analysis of their work will be presented and will go on to compare the similarities and differences between each designer. The essay will conclude with personal thoughts and opinions. The designers that I have chosen are Issey Miyake, a Japanese contemporary designer whose work embraces both innovation and tradion. The other selected designer is Alexander McQueen, a London designer whose work breaks away from the mainstream and gives satisfaction to women by constructing his garments to fulfil the typical stereotype in this day in age. Issey Miyake's is one of the most well known Japanese fashion and textile designers in the world. Miyake was born in Kiroshima in 1938, he completed an art degree in graphics at Tama art university (Tokyo). Miyake's designs focus on shaping around the natural human form. His designs are continually evolving and changing. These impressive transformations alter around the movement of the human figure. ...read more.

The Parisian media viewed McQueen as the run of the mill, working class fashion student. After exhibiting his prestigious tailoring skills he shocked the media so there were no more questions to be asked. McQueen often queries between the approved idea of fashion and beauty which he demonstrates down his catwalks. Many of the catwalk collections are debatable as whether or not this is good or bad taste. He discovered the glamour in bullfighting which turned from a fascination into an actual collection. Ready to wear spring, summer 2002 Alexander McQueen took his collection to the Spanish bull ring creating a bloodthirsty attack. The consequence was ruffled polka dot flamenco frills, jet encrusted epaulettes, bolero jackets, wide jewelled belts and leather trousers laced up the sides. Blood red jackets were reformed and left to hang off the shoulders, skirts were made to look like fans, and dresses were pleated made to look like concertinas. Models also appeared wearing hats holding long traditional knives which were used to taunt the bull (illustration 2). Some people may class this as bad taste because its roots are from a barbaric but cultural sport. ...read more.

This is due to the use of fabric and structure or frame of the design. McQueen's working class back ground gives inspiration and hope to all those ambitious and strong minded enough to want a career in fashion. His use of silhouettes and shapes, although not as extravagant as Miyake's, are more simplistic and refined (illustration 6). McQueen perceives the beauty in fashion is within the clothing rather than the wearer. His poignant use of the disabled model could be criticised. It may be questioned that he was using her in his parade to shock, to put to the test which would grasp more attention, the use of the disabled model or the design of the attire. Shock tactics are not unfamiliar to McQueen, as his collection associated with the Spanish bull ring were a complete exploitation of the savage cruelty that is an entertainment. In conclusion to this essay two designers have been chosen. Their work has been critically analysed and the similarities and differences have been considered. Personal opinions have been deliberated upon and discussed. The chosen designers complemented each other well and showed a contrast to each other. It was a good choice selecting designers of this calibre, although their work is well away from the mainstream comparisons have been found between the two. 1 ...read more.