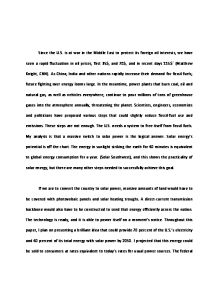 Since the U.S. is at war in the Middle East to protect its foreign oil interests, we have seen a rapid fluctuation in oil prices, first 35$, and 70$, and in recent days 115$` (Matthew Knight, CNN). As China, India and other nations rapidly increase their demand for fossil fuels; future fighting over energy looms large. In the meantime, power plants that burn coal, oil and natural gas, as well as vehicles everywhere, continue to pour millions of tons of greenhouse gases into the atmosphere annually, threatening the planet. Scientists, engineers, economists and politicians have proposed various steps that could slightly reduce fossil-fuel use and emissions. These steps are not enough. The U.S. needs a system to free itself from fossil fuels. My analysis is that a massive switch to solar power is the logical answer. Solar energy's potential is off the chart. The energy in sunlight striking the earth for 40 minutes is equivalent to global energy consumption for a year. (Solar Southwest), and this shows the practicality of solar energy, but there are many other steps needed to successfully achieve this goal. ...read more.

We would need 30,000 square miles of photovoltaic arrays to be put up (A.Leitner, B.Owens, Platt's Research and consulting). Although this area may sound enormous, installations already in place show that the land required for each gigawatt-hour of solar energy produced in the Southwest is less than that needed for a coal-powered plant when factoring in land for coal mining (CHRIS RHODES, ENERGY BALANCE). Studies by the National Renewable Energy Laboratory in Golden, Colo., show that more than enough land in the Southwest is available without requiring use of environmentally sensitive areas, population centers or difficult terrain (NREL). The main limiting factor of solar power, of course, is that it generates little electricity when skies are cloudy and none at night. Excess power must be produced during sunny hours and stored for use during the night. Most energy storage systems such as batteries are expensive or inefficient. Compressed-air energy storage has emerged as a successful alternative. Electricity from photovoltaic plants compresses air and pumps it into vacant underground caverns, abandoned mines, aquifers and depleted natural gas wells. The pressurized air is released on demand to turn a turbine that generates electricity, aided by burning small amounts of natural gas. ...read more.

No major technical advances seem to be needed, but more experience would help refine operations. (CHRIS RHODES, ENERGY BALANCE) We have the technology at our fingertips ready to go, but we need an initiative to do so, and personally I see no greater initiative to start using technologies than protecting the future of our planet. These new technologies and methods that we have can significantly improve our odds against fighting smog, pollution, toxins, and other dangerous material to the environment. Most of these technologies are implemented today in one shape or another, but in order to create a massive combination of these, we need a firm and strong base to withstand the sheer monumental size of the project. That base of operations is what is lacking today and we just do not have the mindset, not to mention the power to create such a system. However, this plan might be a viable option in the near future, and with today's rapidly expanding technological innovations, it's extremely likely that by the year 2050, we will already be utilizing a power system similar to this in its design on a full scale. And in that near future, these greener and more economically feasible technologies might just be what it takes to undo the damage already done to our beautiful planet we call home, Earth. ...read more.