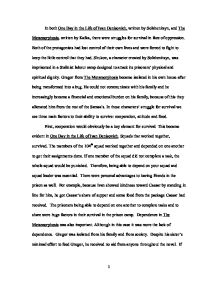 Survival in the Face of Oppression In Solzhennitsyn's One Day in the Life of Ivan Denisovich and Kafka's The Metamorphosis.

In both One Day in the Life of Ivan Denisovich, written by Solzhenitsyn, and The Metamorphosis, written by Kafka, there were struggles for survival in face of oppression. Both of the protagonists had lost control of their own lives and were forced to fight to keep the little control that they had. Shukov, a character created by Solzhenitsyn, was imprisoned in a Stalinist labour camp designed to attack its prisoners' physical and spiritual dignity. Gregor from The Metamorphosis became isolated in his own house after being transformed into a bug. He could not communicate with his family and he increasingly became a financial and emotional burden on his family, because of this they alienated him from the rest of the Samsa's. In these characters' struggle for survival we see three main factors to their ability to survive: cooperation, attitude and food. First, cooperation would obviously be a key element for survival. This became evident in One Day in the Life of Ivan Denisovich. Squads that worked together, survived. The members of the 104th squad worked together and depended on one another to get their assignments done. If one member of the squad did not complete a task, the whole squad would be punished. Therefore, being able to depend on your squad and squad leader was essential. There were personal advantages to having friends in the prison as well. ...read more.

Only prisoners with the right attitudes could survive the camp. Another way that Ivan showed hope for the future was the fact that he counted down the days until he was free. "Nothing had spoiled the day and it had been almost happy. There were three thousand six hundred and fifty-three days like this in his sentence, from reveille to lights out. Three extra ones were because of the leap years." (Ivan 203) Hope has a lot to do with having a positive attitude and staying optimistic. Similar to how Solzhenitsyn used Ivan's hopeful attitude as a factor in his struggle for survival, Kafka used Gregor's selfless attitude. Gregor did not have a positive attitude toward his situation. Gregor's ultimate goal in life was to help his family. He wished to cause them as little harm as possible even if it meant causing him pain. He was the most unselfish character in the novel because he did nothing for himself and everything for others. Before the metmorphosis he was the lead breadwinner in the family, they all depended on him. After the transformation help as much as his prison of a body would let him. For example, he was afraid that his sister was intimidated by his appearance, so he hid himself under the couch so as not to frighten her. Therefore, when his family was talking about the agony and disgrace Gregor was causing the family, Gregor lost the will to live. ...read more.

"He devoured the cheese, the vegetables, and the sauce; the fresh foods, on the other hand, he did not care for; he couldn't even stand their smell and even dragged the things he wanted to eat a bit farther away." (Metamorphosis 54) This method of eating is very unhealthy and contributed to his deteriorating physical health. The lack of food in both novels is a large problem for the main characters. It is important in the way that it both gives and takes life. This is most obvious in the case of the apple lodged in Gregor's side, but is also noticed in the bad eating habits of the characters. Yet again we see both authors giving us a similar message through different characters. In conclusion, the majority of the prisoners and Gregor struggle for survival in different ways. The prisoners form strong bonds with one another, whereas Gregor is isolated from his family and from society. Ivan and some other prisoners have hope for the future. Gregor on the other hand is unselfish to the point of allowing himself to die. Nutritional health is also a large issue, many people in Stalinist labour camps died of starvation and bad hygene, similar to the death of Gregor. Solzhenitsyn and Kafka both approach the struggle for survival in different ways to convey the purpose of the novels. The authors to pass similar messages onto the readers use these two different characters. They are both showing us the pivotal aspects of survival; dependence, the necessities (such as food) and personal attitude. ...read more.