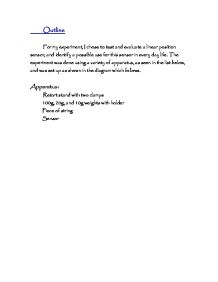 Test and evaluate a linear position sensor, and identify a possible use for this sensor in every day life.

Outline For my experiment, I chose to test and evaluate a linear position sensor, and identify a possible use for this sensor in every day life. The experiment was done using a variety of apparatus, as seen in the list below, and was set up as shown in the diagram which follows. Apparatus: Retort stand with two clamps 100g, 20g, and 10g weights with holder Piece of string Sensor Precautions and Safety Safety was not a big issue when doing this experiment, as no harmful materials or apparatus were used. However, some precautions were taken. I made sure that I had enough space to carry out my experiment effectively, without worrying about knocking anything over; and when applying the weights to the sensor's mechanical contact, I made sure to this gently, and not drop the weights on, which could damage the sensor. Procedure After gathering and setting up my apparatus, the circuit was connected using a pair of connecting wires, a few crocodile clips, a power source, multimeter, and of course the position sensor. In this sensor, the exact circuit set up is not known, however there are two possibilities, both of which are shown in the two diagrams which follow. ...read more.

300 2.48 2.53 250 3.56 3.60 200 4.95 4.95 150 4.95 4.95 100 4.95 4.95 Analysis From the results you can clearly see that increasing the amount of mass applied to the mechanical contact, that is, the force applied to the mechanical contact, decreases the output P.D or voltage. As the mechanical contact experiences a force, it is pushed inwards, which consequently reduces the resistance of the sensor's variable resistor. This therefore, in accordance with V= IR, produces a smaller output P.D or voltage. This type of circuit is known as a potential divider circuit, where the sensor's resistance changes in response to the environment, (in this case an applied force) and so the proportion of the P.D across the sensor changes, which is used to give an output P.D or voltage. From the results we see that the maximum output P.D, is 4.95 V. This then means that at this point, the P.D across the fixed resistor (if first circuit) would be 0.05 V. During the experiment, some anomalies were experienced. When carrying out the experiment by starting with a maximum weight and decreasing gradually, there was unusually low output P.D readings recorded, for the 950g- 850g masses. ...read more.

This then also relates to the sensitivity of the sensor, as gradual minor changes may not be detected as that itself, but rather as a big jump when it reaches a certain point. Conclusion From this experiment we can see that using a linear position sensor in a potential divider circuit gives an output P.D or voltage, relative to the changes in resistance, in response to the environment. An increase in the force applied to the sensor's mechanical contact is associated with a decrease in the resistance of the sensor, and so the output P.D or voltage also decreases. In light of this experiment, and other background research of this sensor, I believe that a contact linear position sensor would be ideal for automotive applications. This is because there needs to be a constant track of the positions of the engine compartments, especially the movement of the engine's cylinders and pistons, and this sensor is protected against an engine compartment environment, (such as high temperatures), which can be harsh. It is also cost-effective, with a long endurance life, and can be 'tailored' and configured to fit the customer's needs or specifications. Here is a picture of the linear position sensor used in my experiment By: Scott de Silvia ...read more.