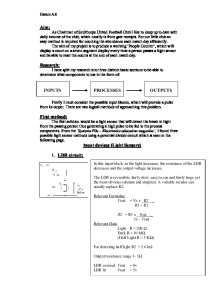 The aim of my project is to produce a working 'People Counter', which will display a count on a seven-segment display every time a person passes a light sensor and be able to reset the counts at the end of each match day.

Aim: As Chairman of Sculthorpe United Football Club I like to keep up to date with daily income of the club, which mostly is from gate receipts. For our little club an easy method is required for counting the attendance each match day efficiently. The aim of my project is to produce a working 'People Counter', which will display a count on a seven-segment display every time a person passes a light sensor and be able to reset the counts at the end of each match day. Research: I have split my research into three distinct basic sections to be able to determine what components to use in the form of: Firstly I must consider the possible input blocks, which will provide a pulse from its output. There are two logical methods of approaching this problem. First method: The first solution would be a light sensor that will detect the break in light from the passing person thus generating a high pulse to be fed to the process components. From the 'Systems File - Electronics education magazine', I found three possible light sensor methods using a potential divider circuit which is seen in the following page. Input devices (Light Sensors) 1. LDR circuit: 2. Phototransistor: 3. Photo Diode: Second Method: The second possible solution other than the light sensor potential divider circuits would be to place a switch on the floor where passers will tread. The switch will close every time a passer treads on it creating a much cleaner output pulse into the process device. Input Blocks 1. Mechanical Switch 2. Debounced Switch Process Devices After generating an output pulse from the input block, this pulse needs now to be counted. ...read more.

As the light on the LDR is blocked, the resistance of it will decrease and the resistance of the variable resistor increases so that most of the voltage is dropped across the LDR, thus giving a high output. An output voltage of > 3.5V is required, as the CMOS chips require an input of 3.5V - 5V for it to switch to logic 1. When the LDR is in the light, the voltage would need to be at < 1.5V as the CMOS chips need to have input voltage levels at 1.5V or less in order to switch to logic 0. Relevant Calculations When LDR is in light: In the shade, Vout will be: These values suit the requirements of the CMOS chips as they require an input voltage of < 1.5V and the outcome form the above calculations provides that. Also for when the LDR is covered, the CMOS requirements is an input voltage of > 5V where the calculation above provides that. Divide-by-10 BCD counter (CMOS 4510B) This is the next sub-system of my device. This system will take the pulse from the input block. The pulse is counted and presented as a binary coded decimal (BCD) 4-bit code at the output. BCD stands for Binary Coded Decimal. A BCD counter has four outputs usually labelled A, B, C, and D. By convention A is the least significant bit, or LSB. The easiest way to understand what a BCD counter does is to follow the counting sequence in truth table form: pulses output D output C output B output A 0 0 0 0 0 1 0 0 0 1 2 0 0 1 0 3 0 0 1 1 4 ...read more.

The process devices BCD counter and the decoder driver where working as the counts were being displayed on the 7-segent displays. To display the initial intent of the working circuit, I replaced the LDR potential divider circuit with a normal switch so to avoid the switch bounce. This produced a much clearer signal to the BCD counter and there were no multiple counts displayed. After doing so another flaw appeared, the tens and units columns seemed to have been constructed the wrong way round and the counts still were not registering correctly. Limitations and modifications I think the main limitation in the performance of the completed circuit is the input block for the LDR potential divider circuit. The LDR wasn't sensitive enough to even detect a person walking past 1 cm away from the sensor. The sensor had to be covered totally to produce an impulse but still a switch bounce occurred as mentioned before. Another limitation is that I made a mistake in not testing each subsystem as I built it and carried out the necessary checks where they were applicable, had I done that a solution could have been identified to the problems that arose when testing the whole system. An obvious modification to the circuit would be to the input block of the LDR potential divider circuit. If a Schmitt trigger was used in the potential divider circuit on the output, a finer signal would have been produced eliminating any switch bounce but not necessarily a more sensitive LDR. Another modification to be considered was using a pressure sensor i.e. a foot switch to produce a more sensitive pulse into the counter instead of an un-reliable LDR. A final modification is a result of a human error; each sub-system should be tested after construction to avoid problems. Hatem Ali ...read more.