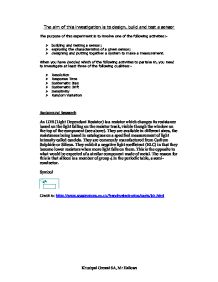 The aim of this investigation is to design, build and test a sensor.

The aim of this investigation is to design, build and test a sensor The purpose of this experiment is to involve one of the following activities:- > building and testing a sensor; > exploring the characteristics of a given sensor; > designing and putting together a system to make a measurement. When you have decided which of the following activities to partake in, you need to investigate at least three of the following qualities:- > Resolution > Response Time > Systematic Bias > Systematic Drift > Sensitivity > Random Variation Background Research An LDR (Light Dependant Resistor) is a resistor which changes its resistance based on the light falling on the resistor track, visible though the window on the top of the component (see above). They are available in different sizes, the resistances being based in catalogues on a specified measurement of light intensity called candels. They are commonly manufactured from Cadium Sulphide or Silicon. They exhibit a negative light coefficient (NLC) in that they become lower resistors when more light falls on them. This is the opposite to what would be expected of a similar component made of metal. The reason for this is that silicon is a member of group 4 in the periodic table, a semi-conductor. Symbol Credit to: http://www.snazzysigns.co.uk/frenchyelectronics/parts/ldr.html Everything has an electrical resistance, some more than others. An LDR will have a resistance that varies according to the amount of visible light that falls on it. A close up of an LDR is shown below: The light falling on the brown zigzag lines on the sensor causes the resistance of the device to fall. ...read more.

This increased number of electrons when light intensity increases, raises the semi-conductor's Conductivity and therefore lowers its Resistivity as the two values are inversely proportional. It is only reasonable to say that as the current through the circuit increases, therefore so too will the voltage across the LDR. My calculations and my research tell me that as the energy from light (photons) falling on the surface of an LDR is used by the semiconductor material to make more charge carriers available, so its resistivity falls as the level of light rises. I would expect a graph of resistance against light intensity to look something like the below:- Finding the Sensitivity of the LDR Method 1. Set up apparatus as shown below: 2. The apparatus must be placed where no other light sources can interfere with the experiment such as in a dark-room. 3. Switch on the bulb. Allow 5 seconds before taking a reading. This gives the filament time to fully heat up, so the bulb is at maximum intensity. 4. Record the current reading on the Multimeter from distances starting from 20 cm and going up to 60 cm in 5cm intervals. 5. The entire experiment should be repeated twice more in order to ensure consistency in the results by changing the power pack voltage supplied from 3 Volts to 4 Volts and then to 5 Volts. 6. Plot graphs of the results. Results Analysis The graph starts off high and swoops down low this means if the distance is short then there is a larger amount of light goes on to the LDR, so there are lots of electrons that are being released, so there is a high current. ...read more.

If we wish to talk about the Quantum aspects of this experiment, this experiment goes a long way to prove that light has particle-like properties as the amount of energy needed to make an electron move from one level to another is fixed and yet the light seems to provide this exact amount every time it falls on the atom. Essentially, the electrons are receiving a certain amount of energy each time. It could be that every single light 'wave' contains an identical amount of energy or it could be true that single photons are delivering an exact 'packet' of energy to allow the electrons to become Charge carriers. Use in Industry In order to convert the sensor I have designed, into a device fit to operate as a switch for apparatus such as a street-light, many modifications would be required. The sensor operates only when needed, so it must be calibrated to engage at the correct resistance (potential difference reading). In order to determine the correct levels for this function, preliminary experiments will need to be carried out. For example, taking voltage readings at the intensity level of light for which the device will be required to illuminate at. The sensor would require a computer that uses a look-up table in order to use this data. I would suggest that the device is situated in a place that will not be influenced by the street lamp itself. The ideal place for this would be on the top; however other precautions will need to be taken to ensure its success. These would include carefully situating the lamp, to prevent the light being obstructed from the sensor by trees etc. ...read more.