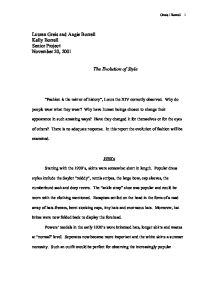 The Evolution of Style

Lauren Greis and Angie Borrell Kelly Borrell Senior Project November 20, 2001 The Evolution of Style "Fashion is the mirror of history", Lours the XIV correctly observed. Why do people wear what they wear? Why have human beings chosen to change their appearance in such amazing ways? Have they changed it for themselves or for the eyes of others? There is no adequate response. In this report the evolution of fashion will be examined. 1930's Starting with the 1930's, skirts were somewhat short in length. Popular dress styles include the Saylor "middy", tennis stripes, the large bow, cap sleeves, the cumberbund sash and deep revers. The "ankle strap" shoe was popular and could be worn with the clothing mentioned. Escapism settled on the head in the form of a mad array of hats-freezes, beret stocking caps, tiny hats and enormous hats. Moreover, hat brims were now folded back to display the forehead. ...read more.

The height of Jax-ness was a pair of gingham capris worn with flat Capezio thong sandals. Both the capris and the capezios came in scads of bright, brilliant colors. Jax capris were lined. The classic jax Capri had no waistband, just finishing band turned back on the hip. It was impractical to wear a belt with them, or keep a blouse tucked inside. They turned to crop tops as the best answer. Like all fashionable pants then, they ended above the anklebone. It wasn't until the late sixties that they adopted a longer pants leg. Knits were no longer strictly for jerseys and Italian striped tops. The new knits are made for fitting easy. They quickly took over the pants industry. Stretch pants often came in nylon called Helanca, with a stirrup strap under the in step were in the stores in 1961. The stirrup kept the pants from creeping up the leg. The pants were meant to be skintight. Most people attempted to hide the strap. People wore the pants with flats. ...read more.

Pale and skinny were out, red lips and stilettos were in. Another fashion of the 90's was the grunge look. Grunge began as a cheap vernacular style, associated with band like nirvana and Pearl Jam. The grunge look was characterized flannel shirts, long loose dresses and heavy boots. Grunge looked as though hippies and punks had merged their wardrobes. "Comfy is out! Glamour is in!" In a short time the "dressed to kill" look would disappear. "Fashion returns to the classics", said Time (April 1995). "After years of driving women away with gimmicks and excess, the latest turn in fashion is back to elegant, wearable clothes." Verace made what time called "pretty, practical clothes" like pink suits. A few weeks' later retailers were complaining that modern women did not want to wear pink. Among young people there was still a great interest in clothing and an expression of identity. What will the fashion trend be in twenty years? Does anyone really know? Clothing is very difficult for many to understand. Maybe it will come to the point where a simple floor length t-shirt can be all the clothes a body needs. ...read more.