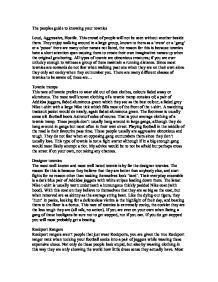 The peoples guide to knowing your townies

The peoples guide to knowing your townies Loud, Aggressive, Hostile. This crowd of people will not be seen without another beside them. They enjoy walking around in a large group, known to them as a 'crew' or a 'gang' or a 'posse' there are many other names not listed, the reason for this is because townies have a short attention span causing them to create their own imaginative names up when the original gets boring. All types of townie are obnoxious creatures; if you are ever unlucky enough to witness a group of them maintain a running distance. Since most townies are cowards do not fear when walking past one when they are on their own since they only act cocky when they outnumber you. There are many different classes of townies to be aware of, these are... ...read more.

This type of townie is not a fight starter although if in a big enough gang would most likely attempt a riot. My advice would be to not be afraid but perhaps cross the street if on your own, not taking any chances. Designer townies The most well known and most well hated townie is by far the designer townies. The reason for this is because they believe that they are better than anybody else, and start fights for no reason other than making themselves look 'hard'. Their everyday ensemble is a dark blue pair of Addidas joggers with white stripes leading down them. The latest Nike t-shirt is usually worn underneath a humungous thickly padded Nike coat (with hood). With this coat on they believe to themselves that they are as big as the coat, but when removed are as skinny as the average string bean. ...read more.

Most of the time Rockport Rangers will be wearing a cap made from a material which can get dirty very easily, one drop of dirty water will ruin it, meaning a new purchase will be required of the exact same style hat with a slight colour difference. These type of townies are just jokers, they make me laugh, dressing like clowns. Football Townies Football townies are the worst for having a conversation with. For example if you were to ask a simple question such as: "Do you know where the toilets are?" they would reply: "Nah, sos mate... do you fancy a kick about?" or "Nah, but did ya watch tha footy on the box last night..." just by making eye contact could cause a chain reaction of football trivia. So if you're a fat batch don't even go near these football freaks. There shouldn't be any worries of running into these people in the street, unless you don't really like football all that much. ...read more.