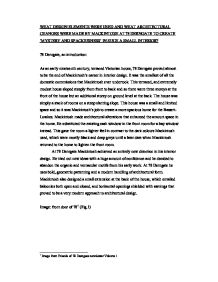 What design elements were used and what architectural changes were made by Mackintosh at 78 Derngate to create mystery and spaciousness' in such a small interior.

WHAT DESIGN ELEMENTS WERE USED AND WHAT ARCHITECTURAL CHANGES WERE MADE BY MACKINTOSH AT 78 DERNGATE TO CREATE 'MYSTERY AND SPACIOUSNESS' IN SUCH A SMALL INTERIOR? 78 Derngate, an introduction: As an early nineteenth century, terraced Victorian house, 78 Derngate proved almost to be the end of Mackintosh's career in interior design. It was the smallest of all the domestic commissions that Mackintosh ever undertook. This terraced, and extremely modest house sloped steeply from front to back and so there were three storeys at the front of the house but an additional storey on ground level at the back. The house was simply a stack of rooms on a steep slanting slope. This house was a small and limited space and so it was Mackintosh's job to create a more spacious home for the Bassett-Lowkes. Mackintosh made architectural alterations that enhanced the amount space in the home. He substituted the existing sash window in the front room for a bay window instead. This gave the room a lighter feel in contrast to the dark colours Mackintosh used, which were mostly black and deep greys until a later date when Mackintosh returned to the home to lighten the front room. At 78 Derngate Mackintosh achieved an entirely new direction in his interior design. He tried out new ideas with a huge amount of confidence and he decided to abandon the organic and vernacular motifs from his early work. At 78 Derngate he uses bold, geometric patterning and a modern handling of architectural form. Mackintosh also designed a small extension at the back of the house, which entailed balconies both open and closed, and horizontal openings shielded with awnings that proved to be a very modern approach to architectural design. Image: front door of 781 (Fig.1) (Fig.2) Mackintosh added extensions to the back of 78 Derngate both open and closed to add to the space inside the home. ...read more.

Bassett-Lowke described 78 Derngate as "distinctly futurist in character". The decorations in the hall represent the result of taking away the partition that previously existed at the entrance passage, and adding the whole of this space to the original front room on the ground floor. This also adds to the spaciousness of the hall. A projecting bay window, known as 'The Willow', with heating coils under the window-seat has also further extended the floor space. The general colour scheme is black, but would later have inserts of yellow and petunia. When Mackintosh first designed the interior of the house, the floors at 78 Derngate were stained black and wax polished and partially covered with horsehair carpet, black centre with broad black and grey chequered border. The stair carpet was grey of the same material. The walls and ceiling were painted a dull, velvety black, and all the woodwork and furniture were stained ebony black and polished. The walls of the room and stairway are divided into panels by bands of stencilled white chequer work, which return on the ceiling and terminate in square panels of stencilled chequer. A later addition to the room was that all around the room on the walls became decorated with a frieze of a rich, heraldic design of V-shaped leaves stencilled in rich golden yellow and outlined with silver grey and enriched at regular intervals by subsidiary V-shaped leaves stencilled in rich, bright colours- emerald green, vermilion, cobalt blue, and petunia purple. This, with the previous black background showing through, gives an effect that is plentiful yet quiet and peaceful. Image: front room (Fig 3)5 All these colours in the front room are echoed throughout 78 Derngate in various fitments. The black and yellow are used in the smoker's cabinet, the green and blue and petunia are in the silk shade of the standard lamp, and the petunia cushions of the window settee. ...read more.

In 1915, before Mackintosh underwent the remodelling of 78 Derngate, he created some fabric designs for Foxton and Sefton. Mackintosh's choice of flowers is such that he appreciates their depth, grandeur and structure. The tulip had been used a lot in Mackintosh's furniture design and he also used the shape of the tulip in his fabric design. With these paintings, Mackintosh established himself as a fine watercolourist. He had a good eye for the shapes and forms of the flowers and soon rejected his earlier spontaneous approach to painting. Image: Begonias 1916 (Fig.6)8 Mackintosh's use of the flower image can be seen particularly at The Hill House, a building he remodelled between 1905 and 1910. Walter Blackie had seen the aesthetic that Mackintosh created at the Glasgow School of Art and was very impressed by it. The Hill House was Mackintosh's largest and grandest project. The flower motif is predominantly present in the 'summer end' of the drawing room; this compromises a light-filled bay fitted with a window seat that overlooks the garden. The drawing room wall features stain glass panels, which echo the stencilled rose and trellis design. The room was originally lit up with four pendant fittings but Mrs Blackie later requested that they be removed. Image: pendant fitting, Hill House (Fig.7)9 Mackintosh's fascination of the form and shape of flowers can be seen in his work throughout his career. His approach was to involve the outside with the inside. He decided to bring the natural forms of the plant inside and develop their forms into the interiors that he worked on. At 78 Derngate Mackintosh created specific places in the front room where plants were to be set either side of the fireplace. The motif of the flower is not as apparent at 78 Derngate as it is in some of Mackintosh's other interiors. However, there are details such as the niches either side of the fireplace that give an idea as to what Mackintosh was trying to create and how he sought to involve natural forms in his interiors. ...read more.