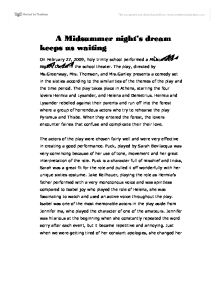 A Midsummer night's dream keeps us waiting On February 27, 2009, holy trinity school performed a Midsummer Night's Dream in the school theater. The play, directed by Ms.Greenway, Mrs. Thomson, and Mrs.Ganley presents a comedy set in the sixties according to the similarities of the themes of the play and the time period. The play takes place in Athens, starring the four lovers Hermia and Lysander, and Helena and Demetrius. Hermia and Lysander rebelled against their parents and run off into the forest where a group of horrendous actors who try to rehearse the play Pyramus and Thisbe. When they entered the forest, the lovers encounter fairies that confuse and complicate their their love. ...read more.

Isabel was one of the most memorable actors in the play aside from Jennifer ma, who played the character of one of the amateurs. Jennifer was hilarious at the beginning when she constantly repeated the word sorry after each event, but it became repetitive and annoying. Just when we were getting tired of her constant apologies, she changed her character into a character into a witty and delightful wall from the Greek mythology story Pyramus and Thisbe. The directors of the play, Ms.Greenway, Mrs. Thomson, and Mrs.Ganley created an amazing set that was spectacular for the play and suitable for the time period. The directors have created smooth transitions from the play inside of a play, the problem was that the play was very lengthy. ...read more.

The make up and costume crew did a great job on the fairies and the actors by providing clothing very appropriate for the sixties and hippie setting. The set, lighting and props created the mood that you where actually watching the real life fairies in the forest. Overall, the play dragged on too long but very well directed and performed. We leave satisfied with learning much more about the play. I would recommend this play to people with a strong English background who enjoy Shakespeare's writing and his plays, and also to teens or children that are learning about Shakespearean writing in school, it will help then understand and gain knowledge about his plays. There are many astounding moments during the performance that were defiantly worth watching. ...read more.